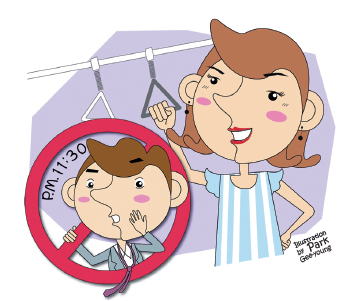 Female commuters may soon have a safe haven from sex offenders when riding the subway, as the capital plans to introduce women-only cars, city officials said Wednesday.

In order to protect women from sexual assault, the Seoul Metropolitan Government plans to gather public opinion on the measure by next month, and implement a trial run by September.

According to officials, the trial run will be held on subway line two, and on the last car of the day which runs around 11:30 p.m.

But some experts believe the measure is a superficial, ineffective approach to deal with sexual violence in subway cars.

“If Seoul is implementing this measure to truly stop sexual harassment, this does not attack the root of the problem,“ Choi Ji-na of the Korea Sexual Violence Relief Center told The Korea Herald.

“The logic behind this measure is very simple-minded,” she said, adding that truly effective measures must tackle the perception of sexual harassment and its victims.

The measure was first introduced in 1992, under which women had their own cars during the morning rush on subway line one and other railroads, but keeping people segregated proved difficult.

The same criticisms are expected to arise this time around.

This time, however, aware of the past backlash from men, the capital decided to rename the cars “women safety cars” rather than “women-only cars.”

“After thoroughly discussing with women’s organizations, we have decided to designate the cars during the late-night hours when women can feel nervous, rather than the busy morning rush hours,” said a Seoul official.

A study showed that the reporting rate of sexual crimes is only 10 percent of total incidents, and considering that reports do not necessary lead to arrests, the actual number of sex offenses occurring in subways is presumed to be astronomically higher.

Choi said that the bulletins in the subway that “teach” commuters about methods to fight sexual violence are a problem in themselves.

The bulletins say that if a woman is wearing a short skirt, she should cover up, which Choi said puts the blame on women.

There is skepticism as to whether or not officials could effectively uphold the measure, or whether it would end up a repeat of before.

“I don’t believe that we can necessarily force male customers out of the designated cars, I don’t know if we can keep order,” said a subway official, as quoted by other news agencies.

The city also plans to post guards to patrol within the subway stations, and expand the “safety zone” program to more stations across lines one through four.