The June figure is unchanged from May, but it saw the largest number of jobs in 11 months, 472,000, added to the economy. 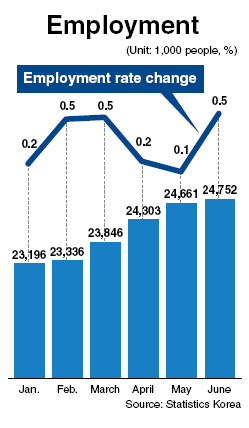 “The job growth is driven by the private sector and we’re seeing the job market conditions returning to the pre-crisis level,” the agency said.

“This is particularly good because we saw a lot of job seekers settling for the jobs made available in the month,” said Song Seong-heon, director of the agency’s employment statistics division.

The manufacturing sector added 118,000 jobs, stretching 16 consecutive months of hiring more than 100,000 jobs. The health and social welfare service sector added 186,000 jobs and retail hired 96,000 fresh workers. The number of people who found jobs in the second quarter exceeds that of the first quarter by 230,000.

Conditions are improving for young job seekers aged between 15 and 29, where mismatch between jobs available and demanded has been a serious problem.

The employment rate for those aged 15 years older stood at 60.3 percent for the month, the highest level since June 2008.

“The economy is showing a relatively fast rate of growth compared with the U.S. where the number of employed people has not returned to the pre-crisis level,” a Finance Ministry official said.

Job creation and fighting inflation fight have been the government’s top priorities for the second half of the year. The Finance Ministry in June made an upward adjustment of its job creation projection from 220,000 to 280,000 for this year. Finance Minister Bahk Jae-wan called the June figure an “unexpected” surprise proving the solid recovery in the labor market at a policy coordination meeting earlier in the day.