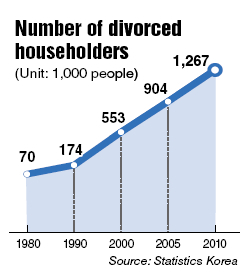 The number of divorced householders exceeded the 1 million mark last year, with seven out of 100 living alone after the dissolution of marriage, a government data showed Monday.

The state-run Statistics Korea said Monday that the number of divorced householders was 1.26 million as of November, a 40.2 percent increase from five years.

The figure has more than doubled over the past 10 years and increased 18.1-fold from 30 years ago, the statistics office found based on its 2010 national census, which is conducted every five years.

The number of divorces here reached 167,000 in 2003, with fluctuations following in the coming years. Considering the falling birthrate here, the nation’s actual divorce rate grows even greater.

Meanwhile, those who became single after the death of their spouse also increased 10.3 percent over the past five years to reach 2.02 million.

The total of those living alone following divorce or bereavement amounted to 3.28 million last year, or 19 percent of householders here.