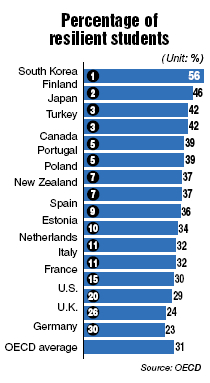 S. Korea has highest percentage of ‘resilient students’ in the OECD


Lim Won-tae, a 16-year-old student in Goyang, Gyeonggi Province, has lived with his grandparents since his parents left about two years ago to stop creditors harassing their family.

After his father’s financial business went bust, Lim began to believe that education was the only sure way to reestablish his family. Even without the private tutoring that most of his peers receive, Lim’s academic performance is among the highest in his class.

“As the financial conditions of my family are bad, I believe I am the only one who can reestablish and bring my family together. One of the other reasons that I study hard is that I can also forget all hardships facing my family while studying,” Lim said.

“My parents always say that they are sorry that they cannot provide me with a good education. I will study hard and succeed so that they don’t feel sorry any more and I can make them happy.”

Like Lim, Kim Young-min, also 16, performs well despite worsening financial conditions of his family. The aspiring police officer is also convinced that education is an effective channel for upward social mobility.

“Like my peers, I cannot afford to hire a private tutor. But there are many places that offer free education such as those on the Internet and on the state-run Educational Broadcasting System,” Lim said.

“I think it all depends on how much effort you make to become academically successful. I want to enter a top-tier university and help ease economic difficulties weighing heavily on my parents’ minds.”

In a report recently released by the Organization for Economic Cooperation and Development, South Korea ranked first among OECD member states in terms of the percentage of “resilient students” who succeed in overcoming their poor social backgrounds.

This report, titled “Overcoming Social Background,” implies that in South Korea, education is still a viable vehicle for those from socio-economically disadvantaged backgrounds to rise through the social pecking order, analysts say.

The report analyzed results of the Program for International Student Assessment carried out in 2009. PISA is a worldwide evaluation of students’ scholastic performance, conducted by the OECD.

The report defines “resilient students” as those from socio-economic backgrounds in the bottom quarter of wealth distribution in their country, but scoring in the top quarter among students from all countries with similar socio-economic backgrounds. The report measures the performance of 15-year-old students in 65 countries and cities, including 34 OECD member states.

The report shows that 56 percent of all disadvantaged students in Korea can be considered resilient. This is far higher than the OECD average of 31 percent.

The report draws particular attention for the lower percentages of resilient students in the U.S., U.K. and Germany, which were below the OECD average at 29 percent, 24 percent and 23 percent, respectively.

“While most of the students who perform poorly in PISA are from socio-economically disadvantaged backgrounds, some peers from similar backgrounds excel in PISA, demonstrating that overcoming socio-economic barriers to achievement is possible.”