Life of an unusual ex-criminal 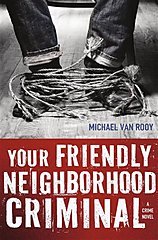 Montgomery “Monty” Haaviko knows a lot about the criminal life, and he’s slowly learning about the straight life. But he does backslide.

As if Haaviko, the hero of Michael Van Rooy’s “Your Friendly Neighborhood Criminal,” isn’t busy enough. He baby-sits by day, and he’s trying to ward off a drug dealer who wants to take over a route that a group of do-gooders use to smuggle illegal immigrants.

Then an old friend and fellow criminal shows up. He wants Haaviko and his wife, Claire, to help him go straight. Haaviko reluctantly takes in “Smiley,” never fully believing his tale of wanting to lead the good life.

“Smiley“ shows up shortly after Haaviko accepts a job setting up and protecting a route for a woman who helps rescue people from dangerous situations and smuggles them into Canada or the United States.

It’s a dangerous proposition in the post 9-11 world, but even more dangerous when a drug dealer finds out about the route and wants to take it over to bring in drugs.

Haaviko, an ex-thief, ex-burglar, ex-armed robber, ex-drug dealer and ex-smuggler, is determined not to go back to jail and leave behind his loving wife and toddler son. However, he isn’t above using some of the skills he learned in his former professions.

Along the way, he shows readers how to disarm an armed bank robber, booby trap and de-booby trap a house and yard, and cope with a house filled with toddlers.

Haaviko is an interesting character with a blend of really bad guy and pretty good guy. He’s also a very smart guy, and the combination provides a rollicking read that is by turns funny, scary and downright gritty.

Van Rooy, who spent almost two years in a correctional facility, drew on his own experiences for his hero.

The Canadian author died at age 42 in January.