By 배지숙
Published : Jul 7, 2011 - 19:06       Updated : Jul 7, 2011 - 19:09
Radiation therapy, together with surgery and chemotherapy, has become one of the three most commonly used methods for treating cancer today. Since the discovery of X-ray, many improvements ― such as the linear accelerator (LINAC), 3-Dimensional conformal radiotherapy and intensity modulated radiation therapy (IMRT) ― have been seen in the field of radiotherapy. Proton therapy can be considered the culmination of these advancements.

When a proton or any larger particle is accelerated by a tremendous amount of energy (several hundred-million volts), radiation called a particle beam is emitted. It has many distinctive properties. The particles pass through the body’s healthy tissues like stealth bombers without causing any side effects (due to low energy dispersion) and safely approach the tumor. 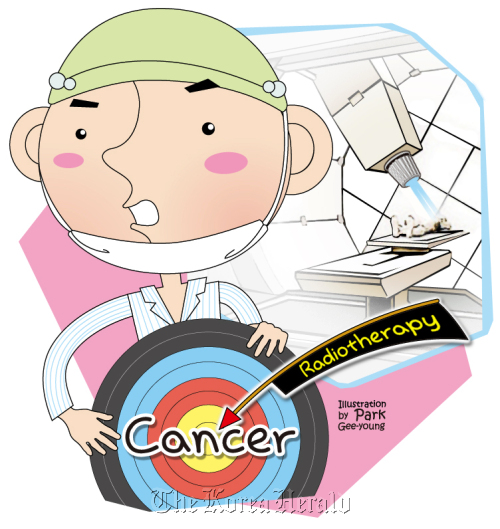 Compared to the X-ray, this treatment minimizes the damage caused to healthy tissues, allowing patients to be treated with barely any side effects. In most cases, radiation therapy effectiveness increases with the amount of therapeutic radiation.

However, the tumor itself does not determine the maximum dosage. The surrounding tissue’s ability to cope with the radiation is the deciding factor. In comparison to the other currently existing treatments, treatments that do not harm the surrounding tissues such as particle beam therapy require a much higher concentration of radiation energy to be shot into the tumor in order to eradicate it.

Because of their distinctive properties, particle beams have been used in cancer treatment research on a limited basis for more than 50 years. In 1990, Loma Linda University Medical Center in the U.S. built the world’s first patient-specific proton accelerator that is also the world’s smallest proton synchrotron still in active use. This hospital is still one of the most active centers for proton therapy.

Today only about 29 medical institutions around the world operate a proton synchrotron. Most of them are located in Europe, the U.S. and Japan. In Korea, the National Cancer Center has been operating a proton cyclotron since 2007. Samsung Hospital has started the installation of a proton cyclotron that should be operational by 2014.

The history of proton treatment is relatively new with only a limited number of medical centers able to conduct the procedure. The lack of data makes it difficult to reach definitive conclusions on proton therapy effects. However, the precision and effectiveness of proton therapy in eyeball cancer has proven superior to that of any other treatment, making it one of the standard forms of treatment.

In some rare cases of chordoma (cancer of the spinal cord), the proximity of the tumor to the central nervous system makes surgery difficult while its resistance to previous methods of radiation therapy limits the tumor control probability by approximately 30 percent. A significant number of documented cases have shown that proton therapy increases the tumor control probability by 70 percent to 80 percent.

For more than 100 years of radiation therapy, the relevance of the X-ray has been unwavering. However, no radiation oncologist believes that this will be the case in the future. A difference will be seen when particle beams eventually replace the X-ray in the treatment of cancer patients. Proton therapy has already been improving the treatment of many cancers that are difficult to cure.

The writer is a professor at department of radiation oncology at Samsung Medical Center. ― Ed.