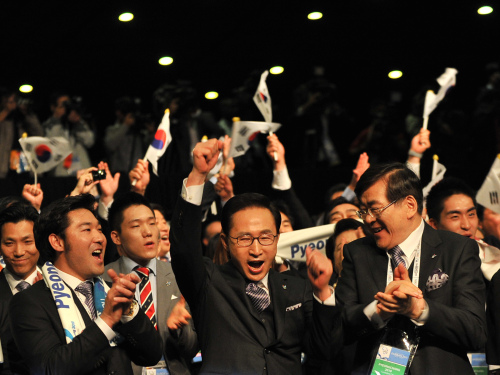 Toby Dawson felt so proud of being Korean, after PyeongChang won the International Olympic Committee vote in Durban, South Africa, Wednesday, to host the 2018 Winter Olympics.

Dawson, a U.S. Olympic bronze medalist in freestyle skiing and Korean adoptee, was the PyeongChang Bid Committee’s last-minute trump card brought in to help the Korean delegation’s final presentation prior to the vote.

The story of Dawson “highlights what PyeongChang 2018 is really about,” explained Theresa Rah, a member of the bid committee.

Taking the podium as the eighth and the last speaker in PyeongChang’s presentations, he introduced himself by saying, “I am Korean by birth and I am also American.”

He went on to say if he hadn’t been adopted into an American family at the age of 3, he may not have had the opportunity to participate in the Olympics.

“Korea simply did not have the resources to provide someone like me, for the chance of competing in the winter games.”

His story fit nicely into PyeongChang’s vision of “New Horizons,” on which Koreans built their case that the 2018 Winter Olympics should come to Asia, an underserved market for winter sports, and help develop winter sports there.

Dawson, who goes by the Korean name Kim Soo-cheol, won a bronze medal for the U.S. in the mogul event at the 2006 Winter Olympic Games in Turin. He has been serving as a promotional ambassador for PyeongChang since the alpine city launched its failed bid for the 2014 Games.