According to the Gwangjin Fire Station, the 39-story Prime Center including TechnoMart, a major electronics retail outlet in Gwangjin-gu, shook violently for 10 minutes at around 10:10 a.m., prompting some 300 people to evacuate.

At the time of the tremors, some 3,000 people were in the building, which houses commercial offices, hundreds of retailers and a theater. All have since been evacuated, following official orders, according to fire officials.

Evacuation of the building was officially ordered some four hours after the tremors, and will last at least three days to conduct thorough inspections. 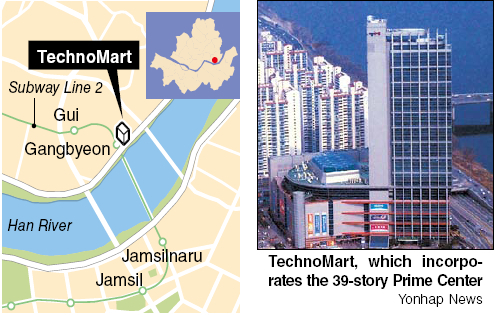 “The building shook up and down so hard it was nauseating. Just in case I and my coworkers evacuated the building,” said Lim Joon-hee, an employee on the 20th floor, as quoted in other news reports.

“The building shook up and down, which didn’t seem like an earthquake. Everyone felt it,” said another employee surnamed Park.

“If it’s not an earthquake, the only other reason why a building like that can shake is if there is a design flaw in the architecture,” said Kwun Joon-bum, a professor at the Architecture School of Sejong University.

Reportedly the tremors were only felt in the Prime Center, as one retail salesman in TechnoMart posted accounts on his blog saying he was unaware of any tremors, and that he was alarmed by people evacuating onto the streets.

Building management officials are looking into what they received as “minor vibrations.”

“We got a complaint that there were miniscule vibrations in the building and we are investigating the reasons,” said a building management official.

“Prime Center is built to withstand seismic activity of at least magnitude 7, but we are still planning to investigate the building with outside professionals,” he said.

As of 2 p.m. Tuesday, those still in TechnoMart and Prime Center were given the order to evacuate for the next three days for further analysis, according to Gwangjin District officials.

“We will immediately place the order and conduct a thorough safety examination,” a district official said.

Kim Ki-dong, chief administrator of the Gwangjin district where the buildings are located, told other news agencies that a police line is ordered in the biggest radius possible to prepare for the event of a collapse.

According to experts, in the worst case scenario the building may be unusable.

“Abrupt damage to the foundations or vertical tresses that support the lower parts of the building is the most likely reason,” said Hong Sung-gul, professor of architecture at Seoul National University, as quoted by news agencies.

Kim said the last time the building was inspected for safety was in 2008.

The recent scare brought a public outcry for thorough inspection of the building to prevent incidents like the collapse of the upmarket Sampoong Department Store in Seoul due to careless construction, resulting in nearly 500 deaths in 1995.