Birzzle, a puzzle game developed by Korea firm Enfeel Inc., ranked first and 10th at the same time in the list compiled by the Netherlands-based market research firm Distimo, which analyzed the data based on the download volume of apps in Asia during May. 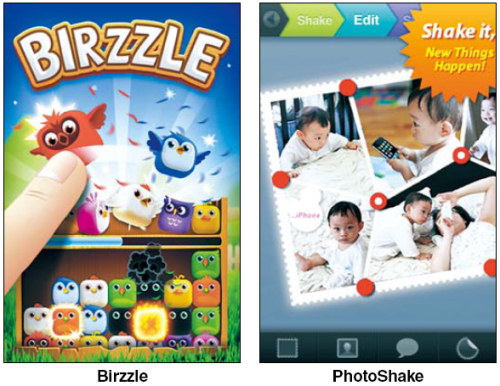 The double listing illustrates the peculiar market conditions of Korea’s iPhone app store. As there is no games category in the Korean app store for Apple’s iPhone users due to a regulatory debacle, Enfeel lists its game in the games section outside of Korea while selling it in the entertainment category in Korea.
Another Korean app in the top paid list is PhotoShake!, which ranked third. The app developed by MotionOne Co. is a photo editing tool with which users can merge different images into a single one by shaking their iPhones.

Paladog by CGFORCE secured the eighth slot in the rankings. Launched in January this year, the app centers on a cute character and engaging character buildup system. Earlier, Paladog had ranked first in the domestic iPhone paid app ranking for two months in a row.

As for the paid iPad app ranking, Birzzle HD ranked fourth in the entertainment category, demonstrating its commercial appeal even on a bigger screen. Another Korean app on the list is Club Matgo Online HD by Fungrep, a game modified from a popular Korean card game called “Go-Stop.”

Only one Korean app, CINE21 by DFolio, is included in the top 10 ranking of the free iPad app. The app is an iPad version for a movie weekly of the same time, with only the special launch issue available free of charge and other issues (there are just two) sold for $0.99 each.

Apple’s iPhone made its debut on the Korean market in December 2009 and the number of users surpassed 2 million in January this year, even though local users are unable to purchase music and game content on the iTunes store due to government regulations.