Hyundai Motor had been regarded as a minor player in the United States and had focused on finding a niche. Its main target was the small-sized vehicle market.

Hyundai Motor and its affiliate Kia Motors saw small vehicles account for more than half in their North American sales in 2001.

But the portion of small cars in Hyundai-Kia’s total sales in the U.S. has declined by 24.5 percentage points over the past decade.

After seeing continuous growth in sales of mid- and large-sized sedans and sport utility vehicles, their portion of the automakers’ sales for small cars has dropped to 30 percent. 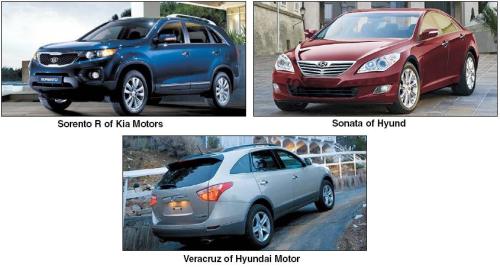 Hyundai Motor vehicles which have led the trend include the Equus, Genesis, Grandeur, Sonata, Veracruz, Santa Fe and the Tucson ix.

“Our brand image has been upgraded there,” a Hyundai Motor spokesman said. “I believe Hyundai-Kia cars gained confidence in product quality as well as price competitiveness compared to Japanese carmakers.”

While the spokesman acknowledged U.S. consumers’ general preference for large vehicles, he said it was noteworthy that “the higher income brackets began acknowledging the technology of Korean automakers.”

During the first quarter of 2011, Hyundai Motor Group’s share of the U.S. market for mid-sized sedans rose to a record high.

The automotive group grabbed 15.1 percent of the mid-sized sedan market in the U.S. by selling 66,554 units of Hyundai Motor’s Sonata and Kia Motors’ K5 (known as Optima in overseas markets) for the first three months.

In terms of units sold, Hyundai Motor Group’s first quarter mid-sized sedan sales increased 62.3 percent compared to the 41,013 units ― the Sonata and the previous Optima which was sold as the Lotze in Korea ― sold during the corresponding period last year.

In the first quarter of 2011, Toyota took 17.2 percent of the market while Nissan vehicles accounted for 15.6 percent.

Honda Motor, which had held the third-largest share of the midsized market, slipped to fourth place with 14.8 percent.

With the overtaking of Honda in the segment this year, the group is seeking to raise its production capacity in U.S. factories.

Last year, Hyundai Motor Group has made significant progress in the North American midsized market since the launch of the sixth generation Sonata. But the Korean auto giant had trailed behind the three Japanese rivals.

Hyundai and Kia’s combined share of the mid-sized market came in at 13.1 percent at the end of 2010, rising above the 10 percent mark for the first time.

Of Hyundai Motor Group’s overall midsized sales, the Hyundai Sonata accounted for about 78 percent with 51,878 units, up 63.4 percent from a year ago.

While the Kia K5 contributed significantly less to the total, its introduction to the U.S. has boosted Kia’s presence in the mid-sized market by more than 50 percent.

Hyundai Motor is also boosting its presence in the U.S. luxury sedan market with its Genesis and Equus vehicles grabbing influential shares of sales.

The company saw its Genesis sedan capture more than 10 percent of the U.S. market in the mid-luxury class for the first time in April.

According to Autodata Corp., sales of the Genesis came to 2,648 units in April, up 16.9 percent from a year earlier. Its market share posted 11.6 percent.

While Genesis ranked fourth in sales and recorded a market share increase from 9.9 percent a year before, Lexus ES saw its share fall from 17.1 percent to 14 percent over the corresponding period.

The two sedans are expected to vie closely for third place in the coming months while the Mercedes-Benz E series and BMW 5 series hold the No. 1 and No. 2 positions.

In terms of accumulated market share between January and April, the Mercedes-Benz E series topped the list with 23.7 percent, followed by the BMW 5 series with 19.4 percent, Lexus ES with 14 percent and Genesis with 11.1 percent.

The U.S. mid-luxury class market is known as an area of keen competition among major global automakers.

Hyundai Motor launched the Genesis in the North American market in June 2008.

The automaker has also been successful in the premium-luxury sedan market as the Equus’ market share surpassed 5 percent between January and April.

The accumulated share of the Equus reached 5.4 percent during the four months with sales of 950 units.

Considering that Hyundai Motor only began selling the Equus in December, there is a possibility that its share could be equivalent to that of the Genesis in one or two years.

“Sales of the Genesis and Equus go beyond our expectations,” a company spokesman said. “We forecast sales of the sedans to reach more than 30,000 and 3,000 units, respectively, this year in the U.S.”