Seating in the Mount Sanbang foothill over 24-acres of land, Sanbangsan Biwon looks like it came from another planet. The garden boasts more than 1,000 kinds of wild flowers, trees, shrubs and rare plant species. Located uphill of Munhwa Village in Bangha-ri, Dundeok-myeon, where both of the Korean contemporary art and cultural maestros Yu Chi-Jin (a writer with pen name Dongrang, 1905-1974) and Yu Chi-hwan (a poet with pen name Cheungma) were born, Sanbangsan Biwon is the largest garden on Geoje Island. 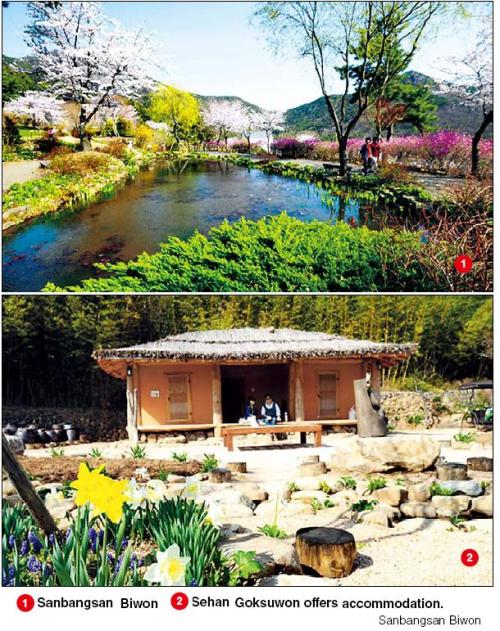 If you stay the night in Sanbangsan Biwon, you will be exposed to still-breathing ancient mysteries of nature. Along with songs of various mountain birds in harmony with the sound of crystal-clear water flowing, the garden, covered in a mountain fog feels like the mysterious dwelling place of a Taoist hermit.

At night, sounds of frogs and glowing fireflies will distinguish the garden from others in Korea.

In a valley coming from near Okgul, or Ok Cave, you will find freshwater fishes such as king crab, crawfish, cuttlefish, catfish and silver carp.

Also near Sangangsan Biwon, there is a tourist site, Pewangseong, where Emperor Uijong of Goryeo Dynasty spent his last three years of life from 1170 to 1173, after being deposed by a military revolt, which was led by warrior Jeong Jung-bu.

Visitors can opt to stay at Sehan Goksuwon, a thatched house built with yellow clay. Behind the house, there is a 500-pyeong bamboo forest.

A nearby tourist site is the Historic Park of Geojedo POW Camp, built around Gohyeon and Suwol districts from February 1951 to jail prisoners of the Korean War. Until late June 1951, it imprisoned a total of 173,000 prisoners including 150,000 communist soldiers and 20,000 Chinese soldiers along with 300 female prisoners. The camp vividly displays the lives of camp prisoners, exhibiting their tents, clothes, as well as photographs and documented records. For more information, call (055) 633-1221.

How to get there:

- By train: Take the KTX from Yongsan Station to Busan. Journey takes about three hours.

- By bus: Take the bus from Nambu Express Terminal to Gohyun Terminal.

- By car: Take the Gyeongbu Express Way to Tongyeong. From the Geoje Bridge, make a right and drive for about 10 minutes.