Asiana flight ‘did not go off route’

“The Asiana flight was flying normally. In fact, another plane had taken that route just 20 minutes before,” a ministry official said.

It backed the claim by Asiana Airlines that the flight from China, with 119 people on board including crew members and passengers, had not deviated from its normal route. The plane was making its descent into Incheon International Airport at the time, it claimed.

“We checked through the air force and the airport control center to make sure there were no abnormalities such as being off course,” a company official said.

At dawn on Friday, two soldiers guarding the southern coast of Gyodong Island in Incheon, 80 kilometers west of Seoul, fired their rifles at the plane for about 10 minutes, misidentifying it as a North Korean military plane. No damage occurred. 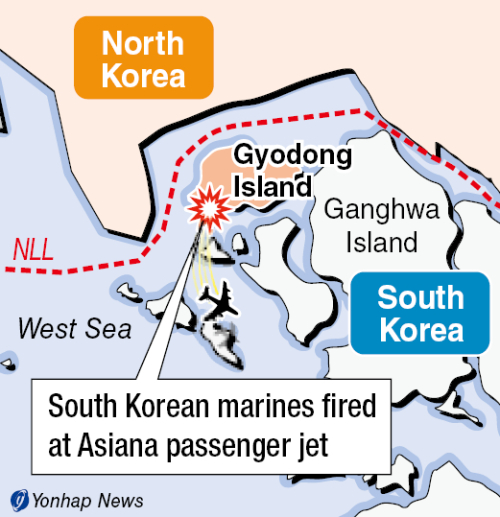 They are thought to have fired a total of 90 rounds at it. The airliner was undamaged as it was about 500 to 600 meters beyond the range of the K-2 rifles.

“When the plane, which the guards said they had never seen before, was approaching, the guards misidentified it as a plane from the North Korean air force and shot at it,” a military source said.

The soldiers claimed the airplane was flying north of the normal route.

The incident came amid lingering tensions over Pyongyang’s two deadly attacks on the South last year that killed 50 South Koreans.

The North recently threatened to break off ties with South Korea and to retaliate against Seoul for anti-Pyongyang psychological warfare.