Four years later, and after yet another impressive triumph at last month’s Players Championship, Choi heads into Thursday’s start of the 111th U.S. Open confident on a Congressional Country Club course that feels like home.

“I don’t know about winning this week, but all I can say for sure is that I’m going to try my best to get the best result from how I play.

“A lot of people that have supported me, my friends, would be happy. It would be a good gift for the people around me.” 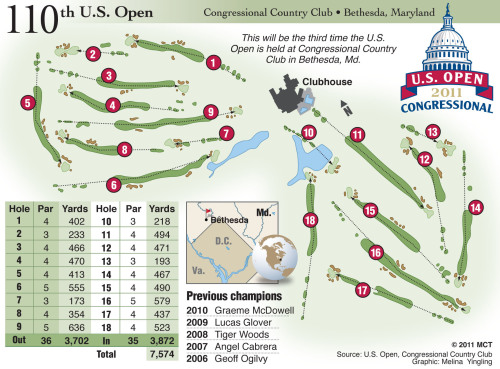 Choi, 41, has eight PGA triumphs and an equal number in non-U.S. events in 12 PGA seasons. He has already won a title at Congressional, the 2007 U.S. PGA National, which came barely a month after a victory at the 2007 Memorial.

“My mindset has changed since then. I think my game is good enough to win a major and even if I don’t end up winning a major I don’t have any regrets because I can say I’ve tried my best at every tournament I’ve played.”

Choi, the Asian No. 1 at 16th in the world rankings, carries sweet memories of his 2007 National triumph into his 11th U.S. Open start, hoping to improve on his best Open showing, a share of 15th in 2005 at Pinehurst.

“It feels good to come back here since winning the TPC,” Choi said. “It feels like home here.”

But it could be a difficult homecoming as well, because the course is much tougher now for a major than when Choi won four years ago.

“The course definitely plays different than when I won in 2007,” Choi said.

“You have to attack it differently. The tee boxes, they are pulled back 20, 30 yards on some of the holes.

“But having played both course setups on this course, it gives me less pressure because I know where to hit it.”

Choi hopes to follow in the footsteps of countryman Yang Yong-eun, who won the 2009 PGA Championship to become the first Asian man to win a major title, also the first to beat Tiger Woods in any major when Woods led after 54 holes.

That will mean finding the narrow fairways, avoiding the dense rough and being pinpoint perfect with his short irons into lightning-fast greens.

“You can’t miss your tee shots on this course,” Choi said. “If you miss a tee shot, you’re going to have a hard time trying to get it on the green. That is where the short game comes in. I’ve been concentrating on my putting and my short game to compensate.

“The key is whether you’re able to hit your second shots and stop it on the green, stick it to the pin within four or five yards. Once you’re able to do that, I think you have a better advantage.”