The most productive workforce aged between 25 and 49 has begun shrinking for the first time in recorded history, data showed on Tuesday, marking a trend likely to continue and weigh down on competitiveness of the economy.

The Statistics Korea said the core productive population stood at 19.54 million as of end-2010, down 367,000 from 19.91 million in 2005. The data is the first evidence of the population shrinkage in the age group capable of supplying the most productive labor for goods and services since the agency began compiling data in 1949. It is updated every five years as the state-run agency runs its census. 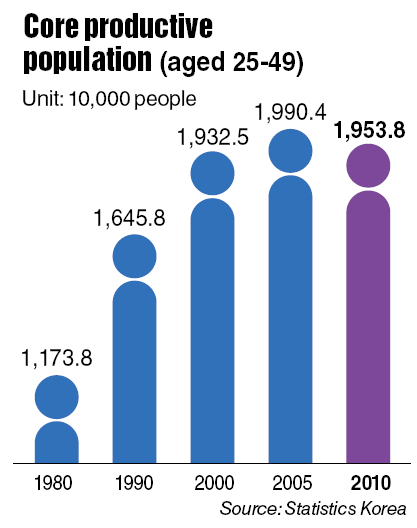 The portion of the age group dropped to 40.7 percent of the total population from 42.3 percent of 2005. Asia’s fourth-largest economy had a population of 48 million as of 2010.

Experts worry that the shrinking portion of the population working not only means less production but also reduced income and tax revenue. The problem ultimately affects the financial soundness of the country and its ability to secure enough revenue to run the country, they said.

“Despite the exit of post-war baby boomers born in 1955-1963 from the core productive population, new people appear to be failing to fill the hole left behind,” an official from the statistics agency said.

The employment rate for the age group in their 50s has exceeded that of those in their 30s past two years.

A report from the state agency said the number of employed people over 50 exceeded 8 million for the first time at the end of April, up 313,000 from the month before. It was the highest figure ever recorded for the age group and double the level in 1991. The increase highlights the smaller number of workers in their 20s as youths now make up a smaller portion of the total population.

A Finance Ministry official said if the core production workforce is downsized, it will lead to the reduction of productivity and a freeze in consumer sentiment. In the long run, he added, it could lower the nation’s potential growth.