Sohn most favored but Park most likely to be president: SNU students

According to the survey of 660 students conducted by the Seouldae Journal, a student newspaper at the university, Sohn, the chairman of the Democratic Party, was supported by 18.3 percent of respondents, slightly ahead of Park of the Grand National Party who came in at 16.4 percent. 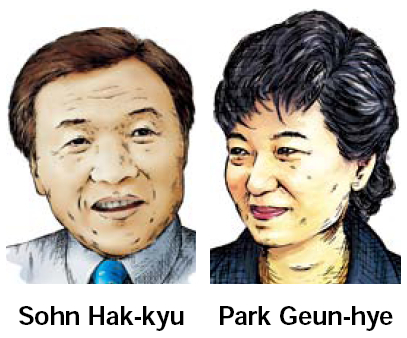 Rhyu Si-min, leader of the minor opposition People’s Participation Party, ranked third at 9.2 percent. Twenty-three percent of the respondents said they supported no one.

When asked who was most likely to win the presidential election next year, an overwhelming 51.6 percent chose Park. Only 14.8 percent picked Sohn.

Interestingly, Park also topped another question asking which candidate they think should never become the president. Some 18.1 percent of respondents chose her.

Park, the eldest daughter of Park Chung-hee, a former military ruler who was assassinated in 1979, leads the pack of presidential hopefuls by a large margin, according to nationwide surveys. She lost to incumbent President Lee Myung-bak in the 2007 GNP primary where Lee won the then-opposition group’s presidential candidacy ticket.

Twenty-two percent of respondents supported the governing GNP, while 16.7 percent backed the liberal opposition DP and 12.6 percent the far-left New Progressive Party. Those who replied that they do not support any political party reached 40.1 percent.

The next presidential election will take place in December next year.