“Work smarter, not harder.” This catchphrase has finally caught on in Korean companies as they pursue better ways of working to fit this all-connected world.

The concept has been around for years, largely among technology ventures, delivery firms and sales departments.

But recently the trend is accelerating and widening as firms try to meet ever-increasing demands of speed and innovation, make the most of technology as well as save cost and time.
The move also helps boost employee morale allowing them to better balance work and life.

“Many corporate chiefs and executives see the potential of smart work in the long term, acknowledging that good ideas and business innovation do not always arise in the office,” said Hong Hyo-jin, a senior research fellow at the National Information Society Agency.

“Suppose workers do the same tasks, but if they can manage their time better, the outcome can be very different.”

Behind the shift is the advancement of mobile communications technology which enables people to work almost anywhere, anytime.

At the forefront in the smart work culture is KT Corp., the country’s top fixed-line operator. Since September, almost all the 32,000 staff members have been allowed to work with no limitations on time and space. 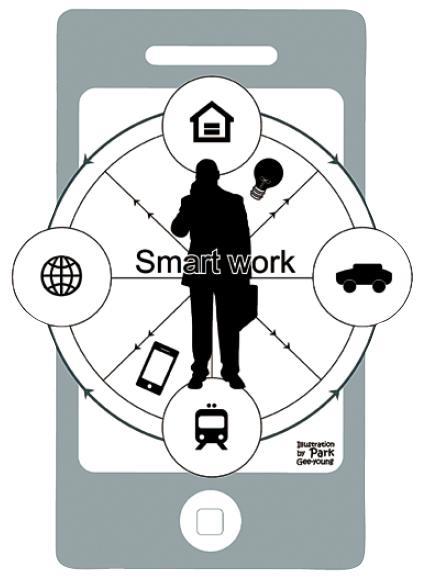 It has set up seven remote work centers around Seoul and in Seongnam and Goyang, both Gyeonggi Province, where employees work with their laptops at any time.

“Employees, those commuting long distances in particular, like the policy very much because they can work at home or a nearby center, wherever they are,” a KT official said.

The launch of the new system has cut the average time workers opend commuting by 64 percent to 58 minutes per day from 161 minutes, he noted. The company plans to increase the number of centers to 30 by 2012 and encourage more people to participate, the official said.

Samsung SDS has been incorporating its expertise in information communications technology to make a freer working atmosphere, called the Adaptive Working System.

On top of running smart work spaces at its six offices in Seoul and metropolitan areas, it supports those who wish to telecommute by providing computers, printers, telephones, office automation products and other necessary devices to equip their homes, SDS said.

The Samsung affiliate also optimized cloud computing technology to enable staff to access its integrated office server wherever they are, while sweeping off security concerns like information leaks.

As part of efforts to boost flexibility, SDS began a flextime program last month to let employees select what time they can show up at the office between 6 a.m. and 1 p.m., a company spokesperson said.

“Our employees are expecting not only to improve productivity but also to form a creative organization culture based on communication and trust, as we can arrange our schedule according to job characteristics and individual circumstances,” he said.

Last year, the builder decided to scrap the use of personal digital assistant phones in favor of smartphones and launched an app that works as an office solution.

“In the past, we had to rush into Internet cafes when out of the office to access the company intranet, which was inconvenient because we had to carry employee certificates all the time,” a GS official said.

“But now we can report or submit documents and get the go-ahead back within the app, so communication became much easier and more efficient than before.”

LG Electronics and POSCO are latecomers to join the drive by remodeling part of their offices to “smarter” ones this year.

On top of a 55-inch liquid crystal display panels and a multi-party telephone system, LG’s telepresence meeting devices include computer software that allows participants from different locations to simultaneously view the same page of a document on the screen.

“The equipment is most effective when three or more people working in each different country need to discuss an issue together,” said an LG worker in the marketing unit, who wishes to remain anonymous.

“Since we can figure out many things sitting in the meeting room here, it has significantly reduced the frequency and shortened the length of business trips for our teams, which I guess is also good for the company.”

On the 24th floor of POSCO’s Seoul office, meanwhile, the company created 25 percent more space by removing partitions and passages between teams and allowing them to freely move around according to their tasks.

Under the plan, it is gradually expanding the idea to reduce the total number of floors in use to 15 from the current 19. Annual economic effects from eliminating four floors are valued at 6 billion won, the steelmaker said.

Many workers and corporate executives have voiced that Korea is badly in need of such a shift. They say the country’s rapid growth over the decades was possible largely because of overwork.

“In the past, many workers worked often longer than they needed to,” said Cho Hyun-kuk, a research fellow at Samsung Economic Research Institute. “That’s not just because they had a lot of work and were short-handed but also no one dared to leave the office when their bosses and seniors got stuck in the office, thus degrading overall industrial productivity.”

In fact, studies have found that hard work does not necessarily lead to high productivity. According to research by the Korea Productivity Center in 2008, Koreans are less productive on average than those in other OECD countries in relation to their working hours.

The slice of telecommuting workforce accounted for nearly half of the total in the Netherlands in 2007 and more than 15 percent in the U.S. in 2008, whereas that of Korea was only 0.7 percent, a SERI paper showed.

In efforts to raise the country’s sagging performance, the government set up a goal last year of beefing up the slice of “smart workers” to 30 percent of the total workforce by 2015.

To that end, it has been pushing local telecom carriers to expand the number of public wireless spots to more than 53,000 throughout the country and to launch a next-generation broadband network, which is faster and can handle exploding data demand.

According to DigiEco, a KT-affiliated think tank, up to a third of the country’s working population of 11.5 million ― at offices with five workers or more ― will be “smart workers” by 2015.

Yet smart work can provide a starting point for sustainable business culture, Cho said, it can retrain employees’ well-being.

“Clearly there are potential side effects which originate from the ubiquity of smart devices ― they could blur the boundary between work and life, or produce even more work, because it means that you are on standby at any time,” he said.

Cho at NIA pointed to the financial and technology gap between conglomerates and small and medium-sized firms in adopting the new trend.

“Smart work is a matter of infrastructure,” she said. “Unlike large companies operating with a long-term vision, immediate business showings are very critical for smaller ones in their survival, which inevitably lead them to shun extra spending on things like smart work.”

Support from conglomerates and the government can be possible answers, she noted.

“Mutual growth is the word on everyone’s lips these days, but the reality is that not so many major firms are cooperating,” Cho said. “They can share facilities with their suppliers or create a smartphone application for them.”