Runners put their (bare) feet down

He has one more answer that typically comes as surprise: It’s not painful. “People are always asking: Does that hurt?” said Peterson, president of the Minnesota chapter of the Barefoot Runners Society. “No, it feels good.” 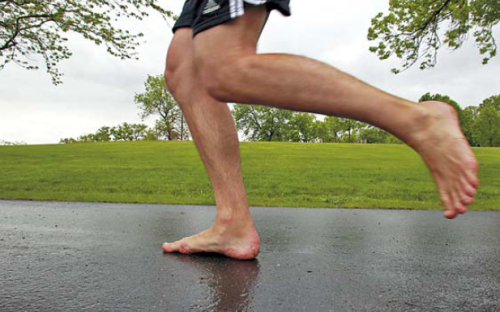 Although logic would seem to dictate that slapping exposed flesh onto asphalt running paths would lead to all sorts of uncomfortable problems, a study at Harvard University found that for some runners, going barefoot actually can reduce injuries or mitigate repetitive stress maladies.

Researchers at the school’s Skeletal Biology Lab conducted the study last year after noticing an explosion in the number of barefoot runners. There has long been the occasional one taking part in elite competitions ― South African distance runner Zola Budd, who set world records in the mid-1980s, probably is the best known ― but the new breed of barefoot runners come from the ranks of casual runners.

“There’s a barefoot frenzy,” said Lisa Zeman, a physical therapist for the running program of Regions Hospital’s Rehabilitation Center and an avid runner herself. “You can’t open a running magazine today without finding an article talking about barefoot running.”

The Minneapolis area barefoot club has about 150 members, but Peterson knows that there are more than that doing it. “When I’m out running, I often see other barefoot runners,” he said. “I always make sure to invite them to come to one of our monthly group runs.”

That was the case for Peterson, of Maple Grove, Minn. “When I read that, I decided to give it a try,” he said. “I was going to work it into my regular training; maybe run barefoot one day a week or something. But it was the best run of my life. I haven’t run in shoes again.”

The barefoot running bonanza ― which also includes runners who wear so-called minimalist shoes that protect the soles of their feet from abrasions ― has generated a marathon of controversy over whether it actually prevents injuries. The critical aspect of the debate, according to Zeman, is that running barefoot can reduce injuries, but that doesn’t necessarily mean it will.

The argument hinges on the theory that the modern-day running shoe, with its heavily padded heel and motion-stability insole, has changed the natural running form. Many runners tend to land heavily on their heels, confident that the shoe will absorb the punishment. But barefoot runners don’t have that luxury. They run the way our pre-fitness-shoe ancestors did, landing softly on the balls of their feet.

“They place their foot on the ground rather than plop it,” Zeman said. “One of the first things many barefoot runners realize is that they run much quieter than when they’re wearing shoes.”

Reducing the force of the landing also reduces the impact that the ankles, knees and hips must absorb, a definite benefit for their durability. But that’s not the end of the discussion. Running shoes have developed thick padding and motion-stability aids for a reason: They help.

“If you have an ankle, knee or hip issue, you need that protection,” Zeman said. “If you have any kind of a weakness, it’s going to come up fast” once you start running barefoot.

She’s not just talking about occasional runners who go out for a 3-mile jog on Saturday mornings. Kealy Malmgren was putting in 30 miles a week when she decided to shed her running shoes.

“At first, it was wonderful,” she said. “I didn’t feel every little pebble the way I was afraid I would. My cardio rate improved. My speed improved. I quickly switched to landing on the balls of my feet, so I felt that my landing was better.”

But within a month, an intense pain developed in her Achilles tendons. After getting Malmgren on a treadmill and videotaping her from various angles, Zeman noticed that she was dropping one of her hips with each stride of the opposite leg. The strain from that, which previously had been absorbed by her shoes, had worked its way down to her Achilles tendons.

After a six-week break to let her tendons heal, she returned to running ― in shoes.

The Harvard study stopped well short of recommending that all runners shed their shoes. It called for more in-depth study of barefoot running, which Zeman wholeheartedly supports.

“Right now, we don’t have nearly enough data to support either side,” she said. “We need data on runners of varying weights, varying ages, some who run a few a miles a week and some who run every day. At this point, we can’t say with certainty whether barefoot running is better or worse.”

So, should people try it? “I get at least one call a week asking me that,” she said. “And I always say, ‘It’s not that simple.’ If you’re already injured, then the answer is no. But if you are not injured, if you don’t have any problems, go ahead and try it if you want.”

Peterson has one warning, though: Be ready for some odd looks.

“There is something counterintuitive about it,” he said of running without shoes. “When I get those looks, I want to stop and tell them, ‘We’re actually normal people.’”