The figure from this March is the second-highest level after it reached a record high of 485,838 won for the one-year period ending last March. 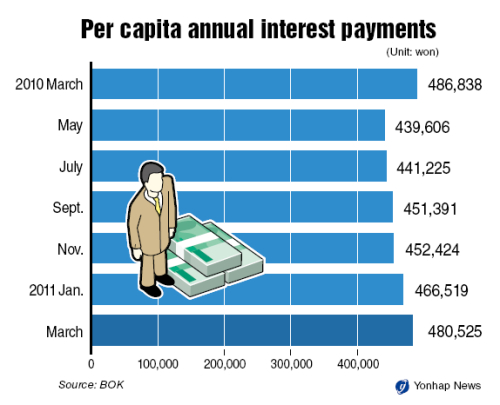 The central bank said private loans from banks, credit card spending and other financial institutions jumped 8.4 percent to 801.4 trillion won in the first quarter from a year ago, the second consecutive quarter of such rapid growth. The amount translates to 19.18 million won per head, which is almost 80 percent of gross national income per capita.

“We believe that Korea’s ratio of household debt to disposable income is one of the highest globally, and it continues to rise,” Moody’s senior analyst Choi Young-gil said.

“Moreover, a high proportion of this household debt burden consists of interest-only, floating-rate mortgages which means that there is little natural amortization of the debt burden as loans season, and servicing costs increase with interest rate rises,“ he added.

A report from the credit rating agency said mounting household debt will pose biggest risk for the local banking sector and may trigger social woes as debt burdens would only rise with more interest rate hikes expected.

The government is mulling to tighten rules on loans for home purchases despite sluggish property market.

“We will come up with groundbreaking measures to lower household debt within first half of this year,” said Shin Je-yoon, vice chairman of Financial Services Commission.