The miracle of the 380g baby

The survival limit of a preterm infant, as specified by the World Health Organization, stands at 24 weeks gestation or less or a birth weight of less than 500 grams. It is very rare for a micropreemie who falls far short of this survival limit to survive, particularly in the case of a boy. 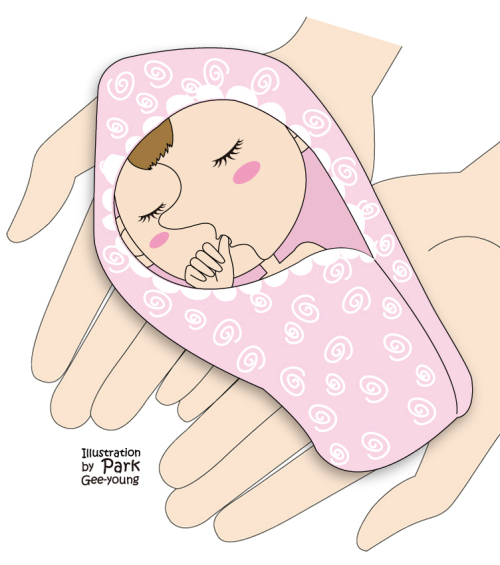 Let’s take a closer look at the treatment that was performed over the past ten months to turn this miracle into a reality. The baby’s mother was suffering from severe toxemia, putting both the mother and the baby in critical condition, and so had to undergo a Caesarean section in the 25th week of pregnancy.

Immediately upon birth, a two-millimeter tube was inserted into the baby’s airway for artificial respiration because the baby was unable to breathe on his own. The baby’s lungs were seriously underdeveloped judging by his closed eyelids and absent nipples, which serve as indicators of lung maturity. A pulmonary surfactant was instilled into the airway, and a special high-frequency ventilator that mechanically moves air in and out of the lungs 900 times a minute was used to minimize damage to the lungs while helping the baby breathe. To adjust body temperature, the baby was kept in an incubator throughout the course of treatment that provided an environment similar to the mother’s womb. The outer layer of his skin was also very thin and fragile, and the slightest contact could bruise it and lead to infection. For this reason, an electrocardiogram monitor couldn’t be attached to his skin. In order to help maintain body temperature and reduce the loss of moisture through the skin, the humidity level was kept at 100 percent at all times inside the incubator, and the staff members were allowed to open the incubator door less than ten times a day. The total volume of the baby’s blood was a mere 30 cc, and thus blood tests were restricted to only once a day, with the amount of blood to be gathered set at 0.1 cc for each test.

His intestines were also very immature and could not absorb the necessary amount of nutrition. A hair-thin catheter was thus inserted into the baby’s blood vessel to deliver 20 to 30 cc of injections per day for nutrition. After that, a specially designed milk formula was provided for an extended period of time to help him grow. His immunity was notably weak, and the use of appropriate antibiotics assisted him to overcome a series of crises such as septicemia.

The most critical moment came during surgery on the third day after his birth. The arterial tube (ductus arteriosus), which connects the pulmonary artery to the aorta, is supposed to close after birth. However, his arterial tube continued to grow bigger than the aorta to more than two millimeters. Therefore, the baby, weighing only 370 grams, had to endure an operation to ligate the tube. In the third month, he underwent a herniorrhaphy due to an abdominal obstruction incurred by a hernia. He is currently taking sildenafil, more commonly sold as Viagra, to treat pulmonary hypertension that occurred in the eighth month.

Intensive care treatment for newborns requires state-of-the-art medical devices, which often alienates the patient who must be the center of attention. Also, it can be considerably burdensome for parents, both mentally and financially, as babies can undergo many crises over an extended period of hospitalization. SMC is putting different measures into action to resolve this issue. The motto of SMC’s Neonatal Intensive Care Unit is “Treatment Oriented for Babies and Families.” To this end, we have no visiting hour restrictions for parents; encourage breastfeeding; send daily text messages describing the patient’s conditions including weight and intake of milk; complete clinical diaries with parents for the duration of the hospital stay; educate parents on how to feed, bathe, and do CPR for preterm infants; and operate a variety of programs to help parents better care for babies.

It is essential to push the boundaries of today’s medicine and develop highly elaborate and advanced neonatal intensive treatment technologies to save such preterm infants with low birth weight. In addition, highly orchestrated teamwork among physicians and nurses and the cooperation of thoracic and cardiovascular surgery, pediatric surgery, pediatric cardiology, pediatric neurology, rehabilitative medicine, ophthalmology and radiology are required to ensure optimal care for patients.

It was rewarding for us to help a tiny premature baby grow healthy enough to be discharged from hospital and to give the family the chance to begin a new life. Even more significant, through the application of advanced neonatal intensive treatment technologies, we highlighted the possibility of saving thousands more preterm infants each year in Korea and opening up a brighter future for them too.

The author is a professor at the department of pediatrics at Sungkyunkwan University School of Medicine and doctor at Samsung Medical Center. ― Ed