Seoul Fortress to be fully restored by 2014

The Seoul Metropolitan Government announced Wednesday a plan to reconnect the 18.6-kilometer fortress and seek to list it as a UNESCO cultural heritage site.

“The Seoul Fortress is the world’s oldest castle walls that are still used for national security,” said Ahn Seung-il, the city’s director-general of culture and tourism.

“It is already a popular tourist spot attracting 230,000 annual visitors. If completed, it would become the city’s representative attraction both for domestic and international travelers,” he said.

The Seoul fortress walls were built in 1396 during the reign of King Taejo, the founder of Joseon Dynasty (1392-1910). More than 110,000 people worked on the 98-day construction involving the four major gates.

However, many sections of the fortress were destroyed by urban planning during Japanese colonial rule and the following Korean War. They were further removed for buildings and roads during the modernization of the city.

The government started the restoration project for the 13.5 kilometers of the wall in 1975. Currently, the 12-kilometer work has already been completed. 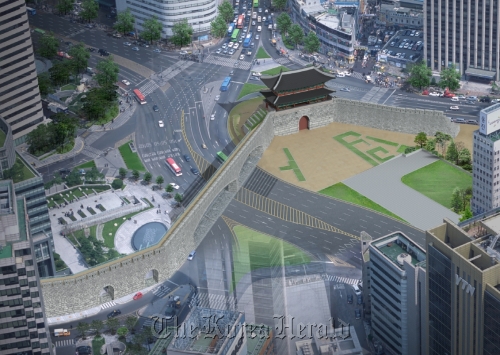 For the remaining sections including the site near Sungnyemun in central Seoul, some overpasses will be built so that vehicles pass under them while the original style is maintained.

Other sections where such structures cannot be built due to convenience and ownership issues will have indicating blocks for visitors.

If completed as planned by 2014, tourists can walk along every corner of the fortress without moving away from the route.

The city also plans to offer tourists programs by dividing some sections of the wall for various purposes such as shopping, history study and eco hiking.