Jobs taken by graduates from universities and vocational colleges totaled 9.54 million as of March, exceeding those taken by high school graduates, 9.5 million.

The trend continued through April, with college graduates topping the figure by 25,000 at 9.56 million. 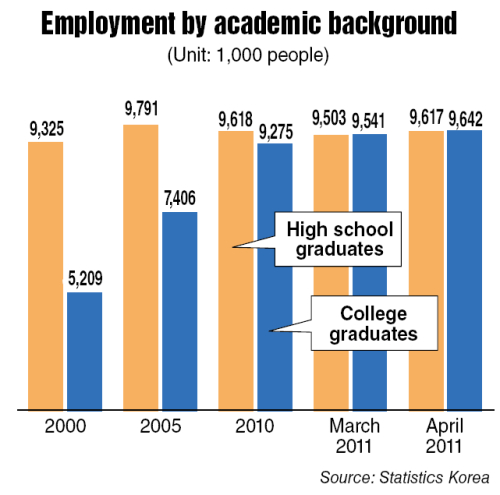 “This reflects competition for good jobs because the employment rate among those in their twenties and thirties has been rising,” Sohn Min-jung, a research fellow at the Samsung Economic Research Institution said.

The state agency attributed the fact to a rising number of jobs that require college degrees which has been pushing even the poorest to enter college for the past decade.

While only 27.2 percent of the population entered college in 1980, the rate jumped to 80 percent in the late 2000s, one of the highest in the Organization for Economic Co-operation and Development. Those who went to vocational high school, where students go solely to learn skills to enter a specific industry, increased three-fold over the same period.

The Korea Employment Information Service forecasts about 217,000 people will join the country’s workforce each year until 2018 and said college jobs would grow to dominate the number.

“It is a good thing that more jobs are taken by young people with higher degrees and skills, but the trend could renew intense competition among students and trigger more spending on private education,” Sohn said.