Choi Hyun-young, a wedding planner by profession, says life has become so much easier since downloading Awesome Note on her smartphone.

The application ― which is basically an online organizer and note-taker ― helps Choi keep her hectic schedule intact with customized folders for work and her personal life, under which she keeps and manages an assortment of memos and calendars.

What’s more, she can even insert images into the notes from her smartphone, and even email the memos directly from the application.

“It’s my new best friend,” Choi said, touching the screen of her phone to reveal who she was to meet that day and other plans.

But it’s not just Awesome Note as there is a long list of applications to choose from on time management. Some users seemed more content with Korean versions of organizers, such as the Smart Calendar, which goes by a Korean calendar with all the lunar dates and holidays.

The smartphone stores that users access to purchase applications may differ according to the operation system their phone carries, but ultimately they were all designed to attract consumers with the lure of an easier and more enjoyable life.

Among a list of the 30 most popular applications on a smartphone, nine were related to online games, according to figures from Future Stream Networks, a provider of mobile marketing solutions.

In related results, applications involving lifestyles, culture and arts, along with news and media were found to be the best-sellers.

Looking for fun and convenience

Even Seoulites who pride themselves on knowing their way around the big city, seemed smitten with the applications to show them the way on subway trains and on the street.

Applications, both free and with price tags involving transportation, such as bus routes and subway stations are available on smartphones.

Many also were using the Daum map to get around.

Finding and enjoying good food is another area smartphone users would be interested in, and applications such as ScanSearch, which gives users a quick scan of nearby restaurants to help them choose the venue and menu, and Wingspoon, an application chock-full of useful tidbits and information on the best eateries in the nation, are some of the most-used and most popular choices. 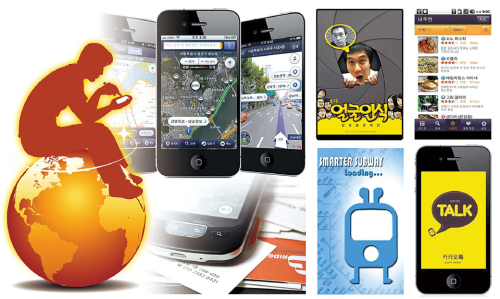 In terms of entertainment, one of the essential aspects and perhaps even the point of having a smartphone, applications have much to offer.

YouTube and social networking applications seem to have been around for ages, along with different types of messenger applications such as Kakao Talk and My People, both of which can be downloaded for free.

With My People and Vonage, another messenger application, users can talk both on and offline with their friends, free of any charge.

The news and media is another source of entertainment for smartphone users, as many have most of the most-commonly downloaded applications for top newspapers and broadcasters such as the New York Times, Time Magazine, CNN and the Financial Times.

Local media outlets such as The Korea Herald, Yonhap news agency, the Chosun Ilbo and others are among the more popular applications users logged into for daily Korean and English news.

Mobile banking applications and movie ticket reservation applications also are being avidly used for the busy smartphone user who is always on the go.

For shoppers, the E-Mart application provides information on money-saving sales and coupon-books to help them shop more economically at one of the nation’s largest retailers.

In education, another area applications cannot miss out on, all sorts of applications on teaching practical courses on English conversation, learning Chinese characters and even Korean history are available.

Money is in the applications

The application business now seems to have a life of its own, as it is expected to break the golden rule that all things mobile cannot raise a profit to possibly unleash a lucrative new industry that may prove to be the most profitable since the dotcoms.

“As the applications get better in terms of quality and more in sync with consumer demands, we will see more of them earning a steady profit,” said Shin Chang-gyun, head of Future Stream Networks.

The actual and potential profit of applications ― not to mention rosy forecasts that up to 20 million out of the Korean population of 50 million will be smartphone holders by the end of this year ― has prompted companies to become more innovative and creative.

Some of these firms are now avidly providing money and infrastructure to nurture individuals who will be capable of creating innovative new applications.

The company is currently aiming to nurture up to 3,000 application developers.

The big wakeup call for fostering such growth came after an application that walks first-time iPhone users through their new smartphones to help them get used to the new gadgets took off to raise an average 1 million won profit per week.

Boasting a clientele of more than 150,000, this application was developed in just 10 days by a team of developers and designers at KT.

The profitability of applications has spawned a growing population of those wanting to become application developers, with many knocking on the doors of academies that nurture such professionals.

ITBank MultiCampus, the nation’s top IT education-related academy with a market share of almost 90 percent, recently said it has seen three times as many people enroll for application development courses compared to last year.