In particular, young Koreans have driven the change. Foreign automakers say the general sentiment has turned to “favorable” from “negative” as younger generations, born in the 1970s and 1980s, have become mainstream buyers.

They also say the number of Korean female drivers of foreign-made cars has been increasing recently, regardless of age.

“Younger customers have less negative sentiment against imported cars,” a spokeswoman of Audi Korea said. “This means the general perception of foreign cars is changing fast.”

She said young customers in their 30s and 20s have been buying more foreign cars over the past few years.

A BMW Korea executive said that the rise in demand from younger consumers reflects their liberal attitudes and stronger individualism, with the Internet era and increased overseas travel also contributing to a weakening of nationalistic sentiment among youth.

“Young customers just choose what they want of their own free will, without caring much about conventional ideas,” the official said.

He said many imported car models with affordable prices are now also attractive to young drivers, adding that until the 1990s, high-income male customers in their 40s and 50s were the mainstream customers. 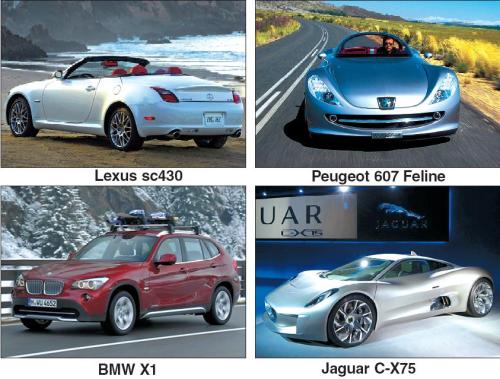 Previously, those rich, older customers hesitated to buy imported cars due to disapproval from the majority of Koreans.

A Volvo Korea spokesman said that many Korean women, including singletons, can afford to buy imported cars, independent of their spouses or parents.

He said female customers are increasingly important to its revenue. “You know wives, not husbands, finally choose colors and designs.”

Foreign automakers are moving to strengthen promotions targeting female drivers. Among them are Peugeot, Volvo, BMW, Audi, Volkswagen and Jaguar.

The Peugeot 1007 is an urban-style compact model with two electric sliding doors allowing women with babies or a lot of shopping to get in and out easier.

Volvo’s YCC, a concept car for women, has a hanger for handbags between front and back seats. It is also equipped with computerized assistance for parallel parking, along with several features aimed at getting shopping bags in and out of the car more easily.

The YCC’s hood does not open because its engine needs a mechanical check only once a year. The car automatically sends a text message to designated garages when it needs repaired.

Female motorists are also increasingly attracted to Volkswagen’s New Beetle, which comes with fascinating interior designs. Its designs are flexible to the point of equipping the car with a flower vase for female drivers.

Foreign carmakers are intensifying diversified and customized promotion to cater to the wishes of young and female customers.

Peugeot has thrown parties at cafeterias and cinemas. It has also offered potential buyers test drives via online marketing over the past few years.

A total of 90,562 imported vehicles were sold here in 2010, up 48.5 percent from a year earlier, according to the Korea Automobile Importers and Distributors Association.

“The import vehicle market completely recovered in 2010 from its regression due to the economic crisis as improved customer sentiment following the economic recovery, coupled with the introduction of new vehicles and aggressive marketing by each brand, pushed up sales,” Yoon Dae-sung, a spokesman at the KAIDA, said.

BMW was the best-selling brand in 2010 with 16,798 vehicles sold here, closely followed by its German competitor Mercedes-Benz which sold 16,115 cars.