Aaron Schock, 29, named “American’s fittest congressman” by the magazine, showed off his six-pack abs for the cover of the June issue and spoke of his daily workout routine and efforts to promote health. 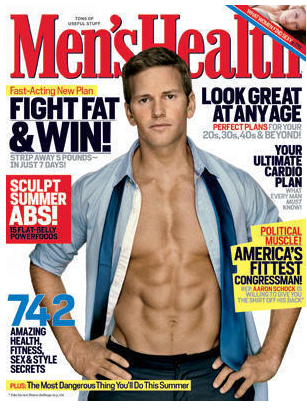 “You have the power to change your life for the better. By making smart, simple food and fitness choices, you can take control of your health and look and feel better than you have in years!” said Schock in the article. “Do it for yourself. Do it for your family. Do it for your country.”

He said eight of every 10 dollars spent on health care is for diseases that are preventable, and emphasized that a healthy lifestyles could revive the nation’s economy by cutting medical bills that are one of the causes of U.S. government’s deficit.

It is not the first time Schock was photographed for a magazine ― he was featured in GQ last year, ABC news reported.

He also appeared on MSNBC’s “The Today Show” and told of how he manages to exercise during his hectic schedule moving between Washington D.C. and Illinois. His workout begins at 5:30 a.m. and he tries to choose healthy food.

But, he confessed that he sometimes has a scoop of ice cream or a slice of pizza.