President Lee Myung-bak on Friday named one of his closest aides and incumbent labor minister as the new finance minister-designate in a partial Cabinet shakeup.

The nominations Friday evening signaled the beginning of the ruling bloc’s post-election overhaul about a week after the Grand National Party’s by-election defeat and ahead of the GNP’s planned leadership change.

All Cabinet members are subject to parliamentary confirmation hearings although their appointments do not require the National Assembly’s approval.

Minister of Employment and Labor Bahk Jae-wan is to replace Finance Minister Yoon Jeung-hyun and Vice Minister of Labor Lee Chae-pil will be promoted to labor minister if they pass through the hearings.

Bahk entered politics in 2004 as the Grand National Party’s proportionate representative and served as chief secretary to coordinate the party’s internal race to pick its presidential candidate in 2007.

“With his extensive experience in the government, the parliament and the presidential office as well as civic groups, Bahk is known for his expertise in policymaking,” Presidential Chief of Staff Yim Tae-hee said in a press briefing. 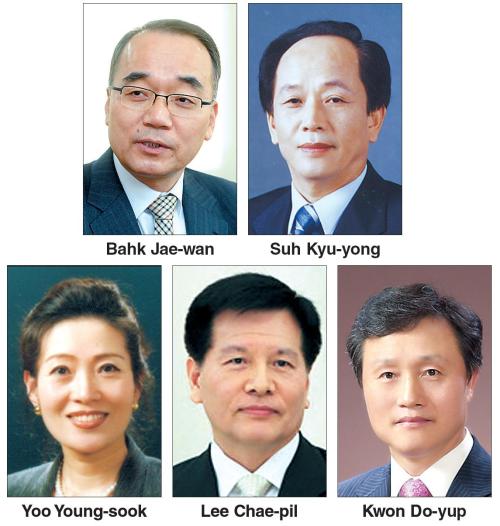 Vice Minister of Labor Lee Chae-pil, who overcame polio growing up and has worked in the labor ministry ever since he passed the civil service exam, will be promoted to fill his boss’s position.

“Lee is an expert of policies for labor-management relations and is believed to be the most appropriate person to push ahead with policies to create more jobs,” Yim said.

Suh grew up working on a farm, majored in agricultural studies and is an expert of agriculture with some 30 years of related expertise.

Former vice director of Korea Institute of Science and Technology Yoo Young-sook was named as the new environment minister-designate to replace Lee Man-eui.

Having majored in chemistry, Yoo has served as president of the Women’s Bioscience Forum and is expected to play a key role in expanding global collaboration in the field of environment, according to Yim.

“Having been in charge of housing policies at the ministry, the former vice minister of land is expected to help resolve housing problems and smoothly complete the four-river development project,” Yim said.

Lee Man-eui and Chung Jong-hwan, President Lee’s longest serving ministers since the beginning of his administration more than three years ago, have been high on the list for replacement for months.

Unification Minister Hyun In-taek and Justice Minister Lee Kwi-nam kept their jobs despite news reports that they would be replaced this time.

The Lee administration’s first presidential chief of staff and ambassador to China Yu Woo-ik, who had been tapped as Seoul’s new top point man on North Korea, was excluded from the Cabinet reshuffle.

Lee’s office has dragged its feet throughout this week due to difficulties in finding people who can do the job well and pass through the tough parliamentary confirmation hearings.

Top official designates are subject to the nationally televised hearings although their appointments do not require the National Assembly’s approval.

Ever since the Lee administration came into power in early 2008, eight of Lee’s nominees withdrew after the parliamentary hearings where opposition lawmakers pound them with humiliating questions mostly on their integrity.

The latest drop out was the nation’s chief state auditor nominee Chung Tong-ki, whom even the ruling Grand National Party disapproved of for the high-paying law firm job he took up immediately after resigning as state prosecutor.
By Kim So-hyun (sophie@heraldcorp.com)