But by February, 40 to 50 hot flashes a day plagued the Oxford, Michigan, woman.

Erickson, a human resources manager for an automotive supplier, turned into the office joke. Friends bought her a cache of fans.

“At some point you either have to laugh about it and have a sense of humor, or otherwise you jump out the window,” she said.

The situation led Erickson to start hormone therapy ― a $2.2 billion industry ― despite risks of breast cancer, heart disease blood clots and stroke indicated in research in the early 2000s.

For women like Erickson, the pendulum of hormone-therapy treatment is swinging once again. It’s offering relief to those struggling with hot flashes, night sweats, insomnia and mood swings as they leave their reproductive years in their 40s and 50s.

“You have to weigh your quality of life,” she said. “Is this something I’d consider staying on the rest of my life? No. But is it something I’m willing to consider for a year or two? Yes.”

Menopause. a woman’s last menstrual cycle and the end of her fertility, occurs, on average, at age 51. But the transition phase, called perimenopause, can last six years or more, with myriad symptoms. Gone are the days when doctors doled out prescriptions for oral estrogen and progestogens, telling women that replacing their naturally dwindling hormones would do everything from stop their hot flashes and mood swings to combat wrinkles and prevent late-age health issues.

“There have been a lot of updates” since that study, said Detroit Medical Center Dr. Susan Hendrix, a clinical professor of obstetrics and gynecology at Michigan State University and a principal investigator for the study. “As any research goes, you get the big picture first, then you try to narrow down the information.” 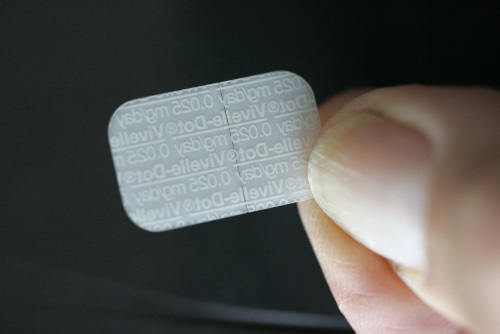 The Journal of the American Medical Association’s April 6 issue reported that another branch of the study continued through 2009 and found that women who had a hysterectomy and who used estrogen did not experience many of the health risks. The study also showed that those women saw a decreased risk of breast cancer.

Dr. Margery Gass, executive director of the North American Menopause Society, said the use of hormones to treat symptoms of menopause has evolved with ongoing research.

Before the National Institutes of Health study, “they were telling women to take them forever, and that’s changed,” Gass said. “Basically (now) it’s using them for a reason, and using the lowest dose that treats the symptom.”

One of the relatively new ways to deliver hormones is with transdermal skin patches, which have not been studied long-term but may reduce the risk of blood clots, Gass said.

Virginia Reader, 72, of Orion Township, Michigan, started taking hormones in pill form at age 48, after dealing with hot flashes and not feeling like herself . Then, her doctor suggested the patch version, and she has used the patches for seven years.

Reader’s doctor, obstetrician-gynecologist Luana Kyselka, said researchers now realize that the original studies looked at mostly women older than 60 who may have already been predisposed to late-life disease, rather than those first experiencing symptoms in their late 40s and early 50s.

“We have this window of opportunity to use hormone therapy without as much risk as we thought,” she said, adding that more recent research has shown that women who begin hormone therapy within months of first experiencing the symptoms of menopause, or who use low-dose estrogen/progestogens, may not be as at risk.

“They’re all still binding to the same receptor in a woman’s body, and they all have the same effect,” Hendrix said.

Scott Popyk, a compounding pharmacist and owner of Health Dimensions Compounding Pharmacy in Farmington Hills, Michigan, said he has seen women benefit from using bioidentical hormones custom-mixed according to their doctor’s instructions.

Earlier research “raised a lot of questions and some doctors took their patients off hormones, no matter what they were,” said Popyk. “I think fundamentally this is about women taking charge of their choices.”

Though Reader is now in her 70s, she started hormone therapy in her younger years and says to her, it’s worth the risk.

“I feel so good, and I think that has a lot to do with it,” Reader said.

“This is about women taking charge of their choices.”

What are the choices?

“I think there’s consensus. If you’re early menopausal (and) you don’t have cardiovascular disease, it’s safe and effective to use hormone therapy,” said Beaumont obstetrician-gynecologist Luana Kyselka. “But I would use the FDA-approved bioidentical transdermal estrogen.”

Board-certified family physician Dr. David Brownstein, author of “The Miracle of Natural Hormones” (Medical Alternatives Press, $18), said he saw a jump in women looking for alternatives to prescription hormones after a study in the early 2000s indicated that some prescription therapies increased women’s risk of heart disease and cancer.

“Definitely women got the message, and there was an increase in interest in non synthetic hormones,” said Brownstein, who encourages the use of hormones that have not been chemically altered and that are custom-mixed in compounding pharmacies. The prescriptions he writes combine drugs produced in FDA-approved facilities and are custom-mixed for a woman’s size and situation.

Other drugs: Detroit Medical Center Dr. Susan Hendrix, co-author of a “Chicken Soup for the Soul” Healthy Living Series book about menopause, at times will look to medications other than hormones to treat symptoms. She prescribes selective serotonin or selective ser otonin/nor epinephrine re-uptake inhibitors, like the antidepressants Prozac and Effexor, which research has shown reduce hot flashes and night sweats. She also sometimes prescribes the seizure medication gabapentin to reduce the intensity of hot flashes.

Studies of the herb black cohosh as well as soy products are inconsistent on hot flashes, Blacker said.

“No. 1 is cleaning up their diet and eating a better diet,” Brownstein said. “When women clean up their diet, their menopausal symptoms get much better.”