This is the 44th in a series of articles introducing the Korean government’s R&D policies. Researchers at the Science & Technology Policy Institute will explain Korea’s R&D initiatives aimed at addressing major socioeconomic problems facing the nation. ― Ed. 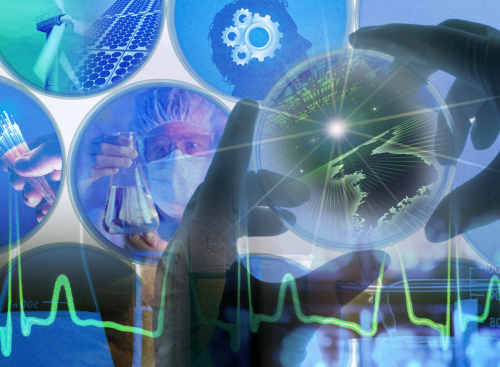 The science and technology community is filled with both expectations and concerns in 2011. Domestically the National Science and Technology Council (NSTC) was launched as a permanent administrative committee in April. The institutionalization and reinforcement of its function is highly encouraging, a long-held aspiration of five million people in the science and technology community. Meanwhile, concerns about the authority and position of a minister-level chairperson coordinating a comprehensive R&D policy of eighteen ministries remain and there is also skepticism about whether the chairperson can meet expectations of effectively and efficiently distributing and adjusting the nation’s R&D budget of nearly fifteen trillion Korean won. Beginning with the revision of the Framework Act on Science and Technology last year, a number of science and technology (S&T) related legislations, including the Performance Management Act and the Industrial Convergence Act, will also be revised, raising expectations that a fundamental change to the science and technology policy environment is forthcoming.

Another reason 2011 is special is that it marks the launch of ministry-wide R&D projects. Despite ongoing advancement in the convergence of technologies and sciences, and the fact that the country’s R&D costs account for as much as 4 percentof GDP, truly relevant R&D projects encompassing all of the ministries have been rare. However, 2011 will see the initiation of a lifecycle new drug development project, which is a collaborative effort in R&D of three major ministries: the Ministry of Education, Science and Technology, the Ministry of Health and Welfare, and the Ministry of Knowledge Economy. This heralds the beginning of a new R&D experiment in order to search for Korea’s new growth engine.

Externally, Korea is growing into a global leader in science and technology based on its platform for big S&T exports, namely, nuclear power plants, and its expansion of overseas official development assistance in S&T. Meanwhile, the contraction of R&D investments in advanced economies, primarily Europe and the United States, is underway since the global financial crisis, whereas R&D investments by China and India are rising steadily. After 2011, R&D expenditures of the Asian region are expected to exceed that of the world’s greatest R&D spenders, the U.S. and Europe. However, a large part of the R&D fields concentrated in China, India and Japan overlap with that of Korea, which signifies that the increase in R&D expenses by Asian countries is likely to result in a weakened potential of the technological foundations of Korea’s key industries, and present a direct threat to the future competitiveness of new industries. The dispersion of national capacity caused by the continued existence of a security threat by North Korea―for instance, the sinking of the navy vessel Cheonan and provocations against Yeonpyeong Island―is also an external threat that must not be overlooked. 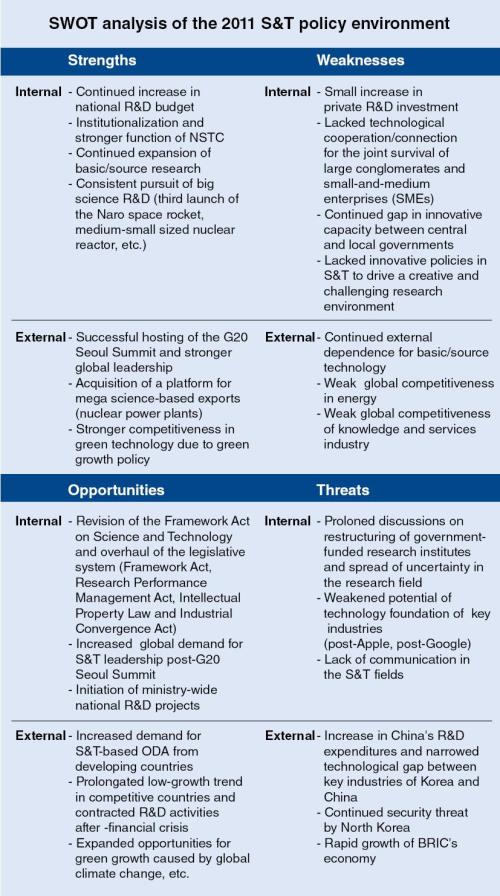 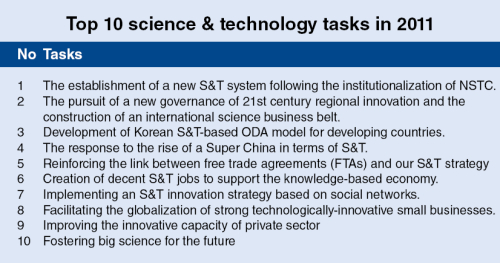 The 10 priority tasks that must be undertaken by concentrating the vision and capacity of the S&T community in response to the domestic and global uncertainties in 2011 are as follows:

First, a new S&T system must be established following the institutionalization of NSTC. The current S&T governance was established during the “catch-up” R&D era. As we proceed into the “creative” R&D era, various problems have begun to surface in planning, management, and performance assessment of national R&D projects. Therefore, the S&T community should gather its wisdom and capacity in order to overhaul its HW and SW governance led by NSTC.

Second, we need to build a new governance for regional innovation in the 21st century and successfully construct an international science business belt. In today’s knowledge-based economy system, resources and capacity are accumulated in the innovative capacity of mega economic regions, which are directly connected to the overall competitiveness of a country. In the advanced mega cities (mega economic regions) of the U.S., Europe and Japan, large-scale investments and deregulation of large cities are widening the gap with cities of other countries. The Korean government is also striving to change the regional system into a 5+2 mega city system, but Korea’s mega cities turned out to be weak in competitiveness and potential compared to their size. In this context, the enactment and promulgation of the Special Act on the Establishment and Support of International Science Business Belt in December 2010 was a positive development for the accumulation of science and technology capacity on a national and regional level.

Third, we must develop a characteristically Korean S&T-based ODA model in providing support to developing countries. S&T is a multi-functional key that can be used as a core method in external policies in all fields, ranging from diplomacy, trade, and education to environment and defense. Therefore, the development of an ODA model tailored to the Korean experience of development utilizing S&T would be welcomed by developing countries. This year will be optimal for Korea to maximize the halo effect of the successful hosting of the G20 Seoul Summit in our ODA projects.

Fourth, we must respond to the rise of a Super China in terms of S&T. With the rapid emergence of China as a “Group of Two” (G2) in the aftermath of the global financial crisis, its influence on Korea is increasing with speed. China is threatening Korea not only in political and economical aspects but also technologically, and it is evident that this will ultimately be connected to the survival of the country. Therefore, it is imperative for Korea to focus its national S&T capacity on maintaining its competitive advantage in the fields where it is superior to China, and prepare and implement a strategy that will unquestionably differentiate Korea in the fields where China is rapidly catching up.

Fifth, we need to create opportunities for growth by reinforcing the link between free trade agreements and our S&T strategy. The importance of S&T is increasingly highlighted in the market opening and expansion of global economic integration through FTAs. Accordingly, if we effectively connected major FTA negotiations ― namely, Korea-China FTA and Korea-Japan FTA ― with our S&T strategy, we will be able to create opportunities for real joint growth and perhaps even seek a new labor division structure in Northeast Asia.

Sixth, we need to create decent S&T jobs to support the knowledge-based economy. According to the definition of S&T workforce by OECD, the number of jobs for S&T experts or engineers in Korea is only one-half or two-thirds that of the U.S. or advanced European countries. This shows that countless talented individuals who majored in S&T do not even get a chance to work in the areas of their specialty. Therefore, the science and engineering support policies that are currently focused on nurturing talents should be adjusted based on personnel, while the S&T jobs must be more diversified and facilitate expertise. Furthermore, the government should continue to expand its support for the career development of science and engineering majors.

Seventh, Korea must pursue an S&T innovation strategy that is based on social networks. It is expected that in the future, there will be a fundamental change to S&T R&D methods with the changes in the social network environment. Given that knowledge, information and people are closely connected in the S&T field, we must identify and respond to any influence on the distribution, utilization and expansion of R&D resources following changes in the connection structure and interaction between information and people. As an example, we need to trigger discussions in the S&T community to build and vitalize the infrastructure for e-science and e-learning, and take an interest in coming up with a technology standard, nurture communities and implement public certification services.

Eighth, we must facilitate the internationalization of strong technologically-innovative small businesses. This will solve the limited growth of a small domestic market, strengthen national competitiveness through participation in the global supply network, and create new jobs through the sustainable growth of SMEs. This will be viable via policy support for overseas exportation through collaboration with large conglomerates. At the same time, the government should provide the latest comprehensive information on overseas technology and markets to enable small businesses to penetrate global markets on their own, and increase institutional support, such as the provision of a program to nurture and train global market experts.

Tenth, we must make a new leap forward to become a leader in mega Science and technology through an innovation paradigm shift. Based on experience, when a country’s GNI exceeds $200,000, it has the basic capacity to undertake large-scale investments that will nurture big sciences. In addition, the more progress in S&T, the more difficult it becomes to expect additional rapid growth without the driving force of big science. Now is the opportune time for us to foster big sciences, which is the reason why a strategic approach for the nurturing of this field is a pressing task, such as the abolition of the barrier between private and defense in S&T, long regarded as a sanctuary, and pursuit of astronomical development based on participation and utilization.

S&T has been an unchanging ray of light in the face of uncertainty and it has transformed many external and internal risks into opportunities in the economic development of Korea. S&T has always been the heart and legacy of the history of challenge and creativity. At the start of a new year, we look forward to the new challenge and creativity Korea will undertake in its quest towards the global frontier in S&T.