Exports rose 27 percent on-year to $49.77 billion last month, with imports rising 24 percent to $43.95 billion, according to the ministry.

“The record-high export numbers were the result of local companies doing well in key areas such as petroleum products, ships and autos,” said An Byung-hwa, head of the ministry’s export-import division.

April marks the 15th straight month that the country has recorded a surplus.

The ministry expected that the trend would continue despite rising concerns over gains in the won.

“Even with the high international fuel prices, the trade surplus will continue into May as the country has been seeing continuous growth in exports,” the ministry said.

Gains in the currency have been helping to curb inflation that exceeded the central bank’s 4 percent target ceiling in each of the first three months of the year.

Korea’s won has advanced to its highest levels since 2008, reaching 1,070.5 won per dollar on Friday, as the nation’s economic recovery accelerated.

Market watchers are projecting that the strong won is likely to dampen the export-dependent country’s growth in the future.

The rise in imports, meanwhile, resulted from higher international prices of raw materials such as crude oil, coal and gas. Imports of crude jumped 50.7 percent on-year with inbound shipments of coal and gas rising 29.6 percent and 11.5 percent, respectively. 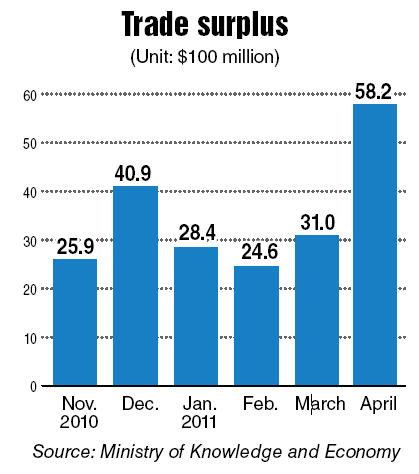 Shipments to Japan, still recovering from the March 11 earthquake and tsunami, soared by 70 percent from the previous year. Elsewhere, on-year growth was 44 percent for the Association of Southeast Asian Nations and 23 percent for the U.S.

Consumer product imports rose by more than 35 percent, while numbers for capital goods, such as semiconductor manufacturing equipment, dropped 23.5 percent.

For the first four months of this year, the ministry said Korea posted a trade surplus of just under $14 billion with exports surging 29 percent to $181 billion and imports rising 25 percent to $167 billion.