Seoul is one of the busiest and largest cities in the world, with famous tourist spots almost always packed with people and cars.

But it is not impossible to enjoy budding leaves, blooming flowers, a gentle breeze and the warm sun on quiet and not-so-steep walking paths in Seoul, away from the city bustle.

As spring quickly passes by in Korea, The Korea Herald recommends easy and quiet walking areas for this weekend ― two in southern Seoul and one in northern Seoul.

COEX Mall in Samseong-dong in southern Seoul is a popular integrated space for movies, shopping and dining altogether.

In spring, however, you should check out the outside of the underground space. There is a 7.4-kilometer walking path that starts at a small forest trails back at the Bongeun Temple, the largest Buddhist temple in southern Seoul, and ends with round-shaped walking paths in Seonjeongneung, the royal tombs of the ninth King Seongjong (1457-1494) and the 11th King Jungjong (1488-1544) of the Joseon Dynasty. The name of Seonjeongneung comes from Seolleung of Seonjong and Jeongneung of Jungjong.

The paths were originally recommended by walking travel expert Yun Mun-gi, author of “Forest Paths that are Good for Walking in Seoul.” 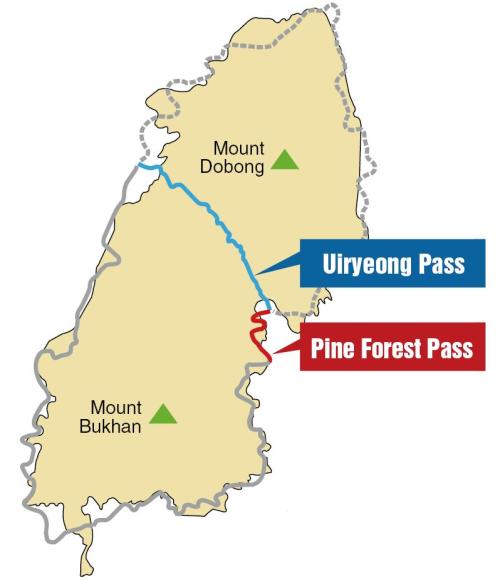 You can start walking from Exit No. 6 of the Samseong Station on Subway Line No. 2 and pass Asem Tower on the left. Across from Asem Tower is Bongeun Temple. After exploring the small trails up the hill inside the temple, go outside and walk along the Bongeunsa-road to the west. Pass the convenience store Buy the Way, currently under construction, and make a left turn to go into an alley that leads to the Seonjeongneung.

Outside the Seonjeongneung, you can head back home by taking Subway Line No. 2 at Seolleung Station Exit 8.

Yangjae Stream, or Yangjaecheon in Korean, is a 15.6-kilometer-long stream that courses down from Mount Gwanak through Mount Cheonggye to the southern Gangnam district.

The stream has become walker-friendly to citizens since it underwent a five-year restoration from 1995 to 2000.

Especially in spring, walking paths along with the stream are filled with cherry blossoms, forsythias and azaleas. The Yangjae Stream was picked as one of the 30 best ecological and cultural walking courses by Seoul Metropolitan Government in 2010.

The path can be divided into six walking sections, with the first section stretching from the west area one block away from Maebong Station on Subway Line No. 3. The sixth section ends at the east area near Hakyeoul Station.

From section to section, there are ecological parks, trails for walking and cycling, rest areas, a bird observatory deck and even some rice paddies for education of children.

Mount Bukhan is one of the top five famous mountains in Korea, offering 13 gently-sloped walking courses for Seoulites. Out of the 70-kilometer pass from Mount Bukhan to Mount Dobong, a 44-kilometer trail has been open to the public since late last August. The remaining trail could open as early as later this year.

Out of the 13 courses, the 6.8-kilometer Uiryeong Pass offers well-preserved nature. The pass is also called “soguigogae,” which was closed off for 41 years since January in 1968, when armed North Korean agents infiltrated close to the Blue House.

As much of it was shut off for more than four decades, you will see a dense pine forest undisturbed by the outside world.

Once you’re at the entrance of the Uiryeong Pass, you can walk up about 1 kilometer and find an army guard post. Behind the post is the forest.

Right below the Uiryeong course is Pine Forest Pass, which is also recommended. The trail is only 2.9 kilometers. Since the pass is wide and the slope is gentle, it is good for a stroll.

One thing you should note before you head to the Uiryeong Pass, is that Korea National Park allows only 1,000 visitors to enter the Uiryeong Pass per day. Unless you make reservations in advance, you cannot enter.

You can make reservations from 15 days to one day before the hiking date at ecotour.knps.or.kr/reservation/Uir.aspx. Phone reservations are available at (02) 900-8085 from 9 a.m. to 6 p.m.