The number of people who own multiple smart gadgets ― such as smartphones, tablet PCs and smart TVs ― is rapidly increasing, pushing telecoms to introduce N-Screen (numerous screen) services which enable data sharing on different platforms.

Global shipments of tablet PCs are estimated to increase by more than 10 times to 208 million units in 2014, a sharp rise from 20 million units last year, according to data from DisplaySearch and Gartner. 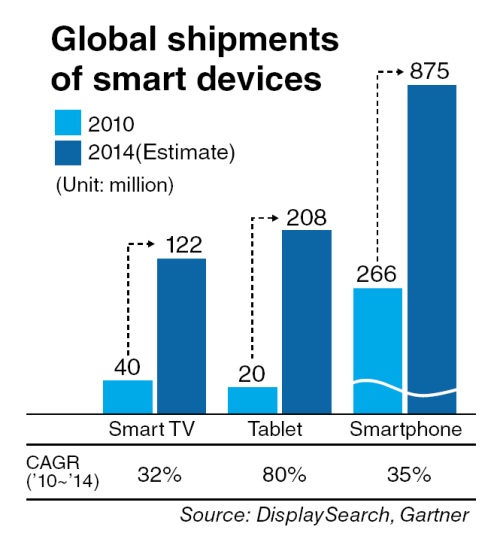 “The surge in smart devices is expected to trigger the expansion of the N-Screen market,” said Lee Jong-keun, a senior consultant at the LG Economic Research Institute.

With such projections, local telecoms have recently announced plans to launch the service.

KT Corp., the country’s largest fixed-line service operator, is planning to release this month an application that allows people to view the contents of its Internet protocol TV and video on demand on their smartphones and tablet PCs.

It will also sign an agreement with overseas channel operators, including those specializing in music and 3-D contents, to cooperate on N-Screen services.

LG Uplus said earlier Thursday that it introduced a wireless N-Screen service, dubbed “Uplus Shoot and Play,” that is the only one based on the standard wireless home network technology called the “digital living network alliance.”

Company officials added that contents can be accessed instantly through the service without having to be uploaded or encoded on the cloud server.

Top mobile carrier SK Telecom, on the other hand, launched the “hoppin” service earlier in January which enables its subscribers to download the watch contents purchased from the “hoppin” market on multiple devices, including personal computers and TVs.

However, the service is currently only available on Samsung Electronics’ “Galaxy S hoppin,” serviced by SKT.

As a follow-up measure, the mobile carrier will release an application which offers the service to other smartphones, such as Galaxy S, by this month, an SKT official said.

Experts, however, said the telecoms move involving the N-Screen service is only an initial step.

Lee of LG Economic Research Institute said companies should further make moves to differentiate the distribution of information and contents to the characteristics of each device, while focusing on the timing.

“(Contents) should be spread simultaneously but they should be optimized to the gadgets,” he said. “One-person-multi-device is becoming a popular trend and we’re currently at the beginning stage.”