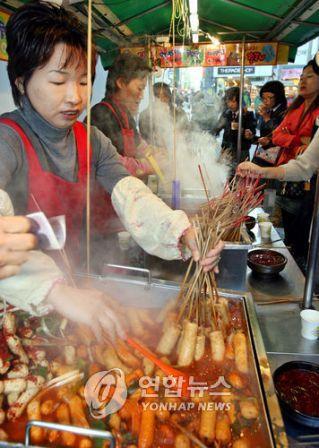 Tteokbokki was the most popular food sold on the streets among foreigners living in Korea, survey showed.

In a survey conducted by Kyung Hee University Institute of International Education, Tteokbokki (rice cakes in hot sauce) was the No. 1 street food foreigners liked to eat (31.1 percent) followed by dak-kkochi (skewered chicken grilled with spicy sauce) with 29 percent and sundae (pig’s intestine stuffed with a vegetable mixture) with 20.2 percent. Fritters placed last at 9.6 percent. The survey was conducted on 455 foreigners living in Korea from 62 different nations from March 21 to April 3.

Fifty-nine percent of participants answered that kimchi was the food representing Korea. However, when asked what their favorite Korean food was, bulgogi (beef in a soy sauce marinade) ranked first with 32.4 percent and galbi (seasoned ribs) followed with 28.7 percent.

Surveys showed foreigners also expressed their liking for not only Korean dishes, but Korean food culture as well. Oscar, a 30-year-old Ugandan, said he was surprised by the amount of side dishes offered at Korean restaurants. “I was surprised that the side dishes were given as much as you liked and was free of charge,” he said.

Over half of the foreigners surveyed answered that they had Korean dishes that they could cook well. Kimchi stew (32.3 percent), Tteokbokki (26.2 percent) and kimbap (rice rolled with seasoned vegetables) (15.9 percent) were food foreigners cooked most often.

Some actually showed confidence in Korean cooking. “I learned to cook Korean food for my husband. Now I can cook sundubu jjigae (soft tofu stew) with ease,” Dimtian from Vietnam said.