Provincial and metropolitan education boards reported that the number of teachers rose 2.9 percent in March from a year before.

The increase was mainly due to a 134 percent increase in Daegu to 567 teachers. The city government said that of the 325 staff added, 252 were newly hired for the academic year beginning March.

The city had previously had by far the lowest ratio of NETs to pupils of any educational district. An Education Ministry report submitted to the National Assembly in September said Daegu had 1,592 students per teacher, against a national average of 893.

North Chungcheong province, which also had a low pupil-teacher ratio, increased its number of public school NETs by 20 percent.

Gyeonggi Province saw a drop of 11 percent in the number of teachers hired ― a total reduction of about 250 teachers. The decline is less than an 18 percent cut announced in November, but more than the 200 cuts it hinted at in March. 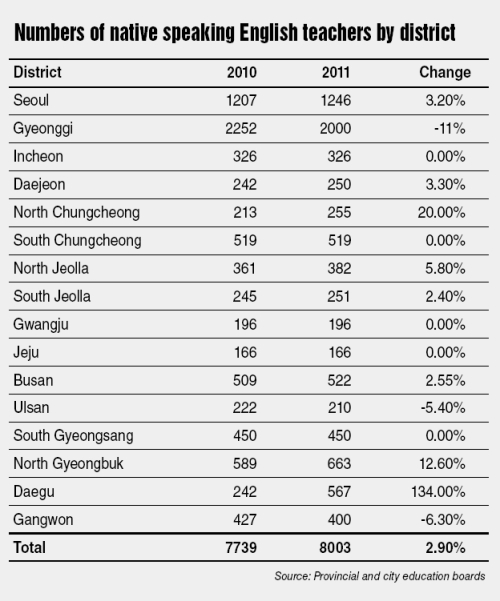 The province has frozen hiring between May and September to “rationalize” hiring, meaning existing teachers with contracts ending within that timeframe will not be rehired through GEPIK, although schools may keep them by securing their own funding.

Seoul saw a small rise, but it was below previously announced plans. The city government stressed that the figures did not count teachers that schools hired through their own budget.

Most districts also said the figures provided were not official, and were subject to revision pending a formal count.