According to the company, with a Kuwait-bound ship carrying 1,023 cars leaving Busan port, its cumulative exports since September 2000 rose to 400,250 units.

The company has been raising its export volume rapidly with the support of the Renault-Nissan Alliance.

During the first six years since its launch, the company remained mostly reliant on the domestic market for sales with 192 units shipped abroad in 2000. In comparison, the company’s sales for that year came in at 12,552 units.

The pattern remained in place in the years running up to 2006, during which Renault Samsung’s exports accounted for at most 3.4 percent of its annual sales. 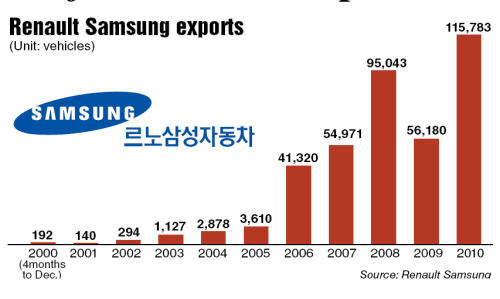 Compared to 2000, last year’s exports figure was about 603 times higher, the company said.

So far this year, Renault Samsung appears to be carrying on the trend.

According to the company, its exports during the first two months of the year came in at about 21,000 units, up 93.5 percent compared to the same period last year, and accounted for more than 50 percent of its total sales for the period.

The company attributed the rapid increase to the use of Renault and Nissan’s sales networks, and their customer-service networks in overseas markets.

The company’s two main export models, the SM3 compact car, and crossover utility vehicle, QM5, are sold under the Nissan and Renault brands outside Korea, with the brand decided according to market presence of the Japanese and French carmakers’ in specific markets.

The SM3 accounted for 64.7 percent of Renault Samsung’s exports up until February this year, while the QM5 took up 29.7 percent of the total.