Tokyo has so far advised against eating broccoli, cauliflower and leafy vegetables such as spinach produced near the Fukushima Daiichi plant. It is also limiting shipments of spinach, turnips, parsley and milk from Fukushima, Ibaraki, Tochigi and Gunma Prefectures.

“Imports of such restricted foods from Japan will be banned until concerns of contamination fade,” Yook Dong-han, vice minister of the Prime Minister’s Office, said. 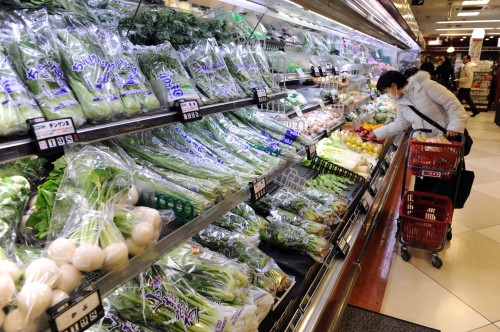 “The government is running safety tests on every food imported from Japan, and none has been found unsafe so far.”

The temporary ban, which took effect immediately, was decided in a government policy coordination meeting presided over by Prime Minister Kim Hwang-sik on Friday.

The government will promptly provide information on the extent of contamination in Japan and results of safety inspections on imported foods here via government websites and media, Yook said.

Seoul will also run a task force for safety management of imported foods from Japan under the Agriculture Ministry and the Korea Food and Drug Administration.

The government said it secured 13 new precision equipments to detect radioactive contamination in foods in addition to the 11 it already has.

Japan announced a week ago that radiation levels in spinach and milk from farms near its tsunami-crippled nuclear complex exceeded government safety limits, while playing down immediate risks to consumers.