With spring just around the corner, dessert lovers might be experiencing a new set of cravings for classic chou a la creme.

Gobs of cool cream or custard oozing out of airy choux pastry shells lose out to molten chocolate fondue and souffles in the winter but hit the mark on a warm, sunny day.

In Britain, they are generally called profiteroles, in America cream puffs and here, in South Korea, there are referred to as choux cream.

Dusted with powdered sugar, drizzled with chocolate syrup or presented nude, they emerge bite-sized or fist-sized, depending on the whim of their creator.

Huge globes of pastry line the racks under the mini cafe’s quaint take-out window. Employees pipe the crackled shells full of a vanilla-infused combination of fresh cream and custard ― jade green for the matcha choux, a luscious doe brown for the chocolate.

Best enjoyed like a hamburger ― gripped between both hands and bitten into slowly to avoid splatter ― the 5Cijung profiterole is a hedonistic, blissed-out, dairy-heavy experience.

Oh plans on introducing vanilla ice cream choux in April and is working on expanding the variety of cookie chou to include other flavors such as Earl Grey tea.

For now, they can only be found at the Galleria outlet of 5Cijung.
“We will also be selling them at the Bundang shop when it opens,” said Oh.

While 5Cijung’s Oh is willing to reinterpret the traditional treat, Sweets Planet chef Jeon Jin-wook is a staunch believer in sticking to basics. 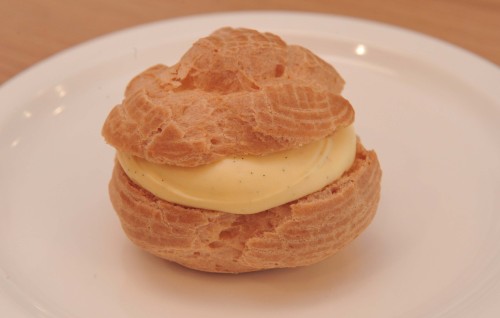 His legendary chou a la creme emerge massive and simple ― beige spheres bulging out the sliced center with vanilla-speckled custard so stiff it requires a spoon.

“We only use a little bit of cream and a lot of egg yolks for our filling,” said Jeon, who studied at Ecole de Patisserie de Tokio in Japan.

A little bit of salt is added to the shell batter, an ideal foil to the toothsome, decadent inside. No powdered sugar decorates the top. The Nonhyeon-dong cake cafe clearly aims for a minimalist expression of the dessert.

In stark contrast to Sweets Planet’s big and straightforward profiteroles, Patisserie Chou a la Creme’s creations are petite and ornate. 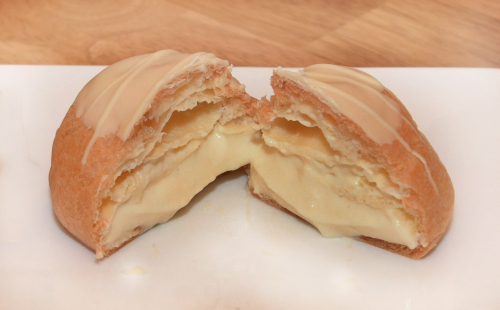 The vanilla, green tea and strawberry cream puffs are covered in icing made from white chocolate, with the chocolate version clad in a dark robe of cacao.

Small and dainty, the newly-opened Sinsa-dong shop’s sweets proffer customers the choice of enjoying several at a time.

Top picks are the vanilla and chocolate choux, where glossy, ivory, pudding-style custard gets the spotlight or a light chocolate filling is punched up by its rich shell.

It helps that each puff only costs 900 won.

Customers have already picked up the knack for ordering two or four morsels at once. Plates laden with the adorable delights are shuttled off to tables, where they will be devoured one gooey bite at a time.