Residents ordered to stay indoors and not to turn on ventilators


SOMA, Japan (AP) -- Radiation leaked from a crippled nuclear plant in tsunami-ravaged northeastern Japan after a third reactor was rocked by an explosion Tuesday and a fourth caught fire in a dramatic escalation of the 4-day-old catastrophe. The government warned anyone nearby to stay indoors to avoid exposure.

In a nationally televised statement, Prime Minister Naoto Kan said radiation has spread from four reactors of the Fukushima Dai-ichi nuclear plant in Fukushima province, one of the hardest-hit in Friday’s 9.0-magnitude earthquake and the ensuing tsunami that has killed more than 10,000 people.
“The level seems very high, and there is still a very high risk of more radiation coming out,” Kan said. ”We are making utmost efforts to prevent further explosions and radiation leaks.”

This is the worst nuclear crisis Japan has faced since the atomic bombing of Hiroshima and Nagasaki during World War II. It is also the first time that such a grave nuclear threat has been raised in the world since a nuclear power plant in Chernobyl, Ukraine exploded in 1986.

Kan warned there are dangers of more leaks and told people living within 30 kilometers of the Fukushima Dai-ichi complex to stay indoors to avoid radiation sickness. Some 70,000 people had already been evacuated from a 20-kilometer radius and 140,000 remain in the zone for which the new warning was issued.

Three reactors at the power plant were in critical condition after Friday’s quake, losing their ability to cool down and releasing some radiation. A fourth reactor that was unoperational caught fire on Tuesday and more radiation was released, Chief Cabinet Secretary Yukio Edano said.

The fire was put out. Even though it was unoperational, the fourth reactor was believed to be the source of the elevated radiation release because of the hydrogen release that triggered the fire.
“It is likely that the level of radiation increased sharply due to a fire at Unit 4,” Edano said. “Now we are talking about levels that can damage human health. These are readings taken near the area where we believe the releases are happening. Far away, the levels should be lower,” he said.

”Please do not go outside. Please stay indoors. Please close windows and make your homes airtight. Don’t turn on ventilators. Please hang your laundry indoors,” he said.
“These are figures that potentially affect health. There is no mistake about that,” he said.

He said a reactor whose containment building caught fire Monday has not contributed greatly to the increased radiation. The radiation level around one of the reactors stood at 400,000 microsiverts per hour, four times higher than the safe level.

Officials said 50 workers were still there trying to put water into the reactors to cool them. They say 800 other staff were evacuated. The fires and explosions at the reactors have injured 15 workers and military personnel and exposed up to 190 people to elevated radiation.

The death toll from last week’s earthquake and tsunami jumped Tuesday as police confirmed the number killed had topped 2,400, though that grim news was overshadowed by a deepening nuclear crisis. Officials have said previously that at least 10,000 people may have died in Miyagi province alone. 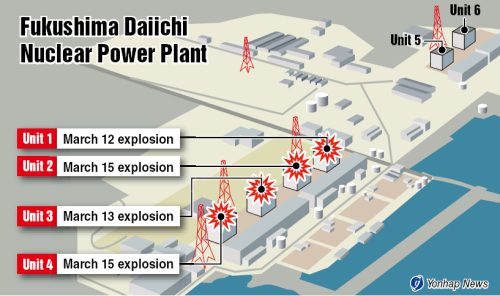 Millions of people spent a fourth night with little food, water or heating in near-freezing temperatures as they dealt with the loss of homes and loved ones. Asia’s richest country hasn’t seen such hardship since World War II.

Hajime Sato, a government official in Iwate prefecture, one of the hardest-hit, said deliveries of supplies were only 10 percent of what is needed. Body bags and coffins were running so short that the government may turn to foreign funeral homes for help, he said.

Though Japanese officials have refused to speculate on the death toll, Indonesian geologist Hery Harjono, who dealt with the 2004 Asian tsunami, said it would be “a miracle really if it turns out to be less than 10,000” dead.

Harjono noted that many bodies in Japan may have been sucked out to sea or remain trapped beneath rubble as they did in Indonesia’s hardest-hit Aceh province. But he also stressed that Japan’s infrastructure, high-level of preparedness and city planning to keep houses away from the shore could mitigate its human losses.