Korea’s central bank raised its key interest rate for the second time in three months Thursday as it steps up efforts to control inflation.

The Bank of Korea lifted its benchmark base rate to 3 percent from 2.75 percent at a monthly meeting. The rate influences a variety of borrowing costs, including those on overnight loans between financial institutions and more broadly on items such as mortgage and credit card debt.

Korea’s consumer price index jumped in February to its highest level since November of 2008 and remained outside the central bank’s inflation comfort zone for a second straight month.

The rate increase came on the heels of a rate freeze in February and marked the fourth rate hike since July last year from a record low of 2 percent. 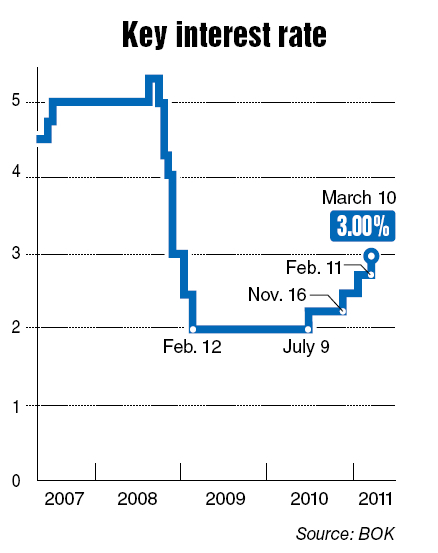 The BOK chief warned that the country would face growing inflationary pressure, affected by both supply and demand factors, and added that the bank’s cycle of monetary tightening will continue in a gradual manner.

“The rate hike is expected to contribute to curbing inflationary pressure and inflation expectations,” Gov. Kim told a press conference after a rate-setting session.

“Economic recovery in major economies and improvement in the local labor markets are expected to offset burdens stemming from gains in oil prices.”

Kim said gradual and steady normalization of the policy rate is seen as more effective than a sharp increase, hinting that the pace of a rate increases was not steep.

The BOK and central banks in China, India, Brazil and other countries have been raising interest rates amid higher inflation.

New Zealand’s central bank, however, cut its benchmark rate earlier Thursday to 2.5 percent from 3.0 percent, citing the negative impact of last month’s deadly earthquake in the city of Christchurch on economic confidence in the South Pacific country.

“We expect inflation to peak either in March or April, as rising oil prices are spreading to non-food prices,” said So Jae-yong, economist at Hana Daetoo Securities. “Considering the burden oil prices may present to the economy, the next rate hike is more likely to come in May than April.”

Korea is facing growing difficulties in taming inflation as rising oil and commodity prices, and a gain in food costs, sparked by the outbreak of foot-and-mouth disease, are exerting upward pressure on consumer inflation.

The country’s consumer prices jumped 4.5 percent in February from a year ago, up from 4.1 percent in January and the fastest growth in 27 months. Consumer prices surpassed the upper ceiling of the BOK’s 2-4 percent inflation target band for the second straight month.

Core inflation, which excludes volatile oil and food prices, grew 3.1 percent in February from a year earlier, the most in 18 months, indicating that demand-pull inflationary pressure is growing.

The BOK governor said consumer prices may surpass the bank’s previous estimate of 3.7 percent in the first half although surges in inflation will ease in the second half.

The government has been making efforts to stabilize prices since it declared a “war” on inflation, mindful of concerns that higher inflation will undercut the growth momentum. President Lee Myung-bak said that inflation has become a bigger concern than economic growth this year.

The government has unveiled a set of anti-inflation measures such as freezing public utility fees, easing import taxes on basic goods and cracking down on price-rigging. But despite such all-out efforts, there is no sign of easing of inflation yet.