The country’s largest builder aims to become a global top 20 builder by 2015 under its long-term growth plan Vision 2015 launched last year. By the target year, the company expects to achieve 23 trillion won ($20 billion) in sales, 54 trillion won in overseas orders and earnings of 2.2 trillion won. 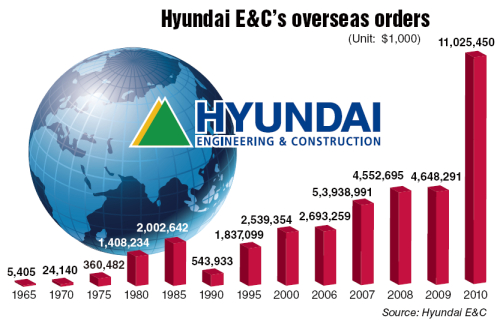 Last year, the builder showed a record performance with overseas orders of $11 billion. It was the first time a Korean builder had surpassed the $10 billion mark.

Hyundai Engineering plans to raise the amount of its overseas orders to $14 billion this year, which is expected to account for around 60 percent of its total sales, it said.

To further boost its offshore business the firm plans to step up efforts to diversify overseas markets which currently are mostly focused on Southeast Asia and Middle East.

The firm will also expand the portion of its engineering and purchasing businesses from current 37 percent to 50 percent in a bid to improve profitability.

To become a leading global builder, Hyundai Engineering said it would work more on research and development of key technologies and fostering talented human resources as well.

Most notable among the firm’s offshore projects in 2010 was winning a $534 million order to build a high-tech medical center in the capital of Qatar in December.

The builder signed a contract with Qatar’s Public Works Authority to construct Hamad Medical City at the 2006 Doha Asian Games site, beating industry leaders from the U.S. and Italy.

Hyundai Engineering will renovate the site, which was used as an athlete’s village and offices for the Asian Games, into a hospital which specializes in gynecology, surgery and rehabilitation, as well as a medical research center, the builder said.

“Qatar is an important market which is expected to place orders for diverse large-scale construction projects as the hosting country for the 2022 World Cup,” a Hyundai Engineering official said.

Hyundai Engineering also had a good start this year, winning contracts for a $169 million petrochemical plant in Abu Dhabi, and a $350 million second tower as part of Asia Square project last month, which is a multi-purpose building for offices, and a hotel in Singapore.

Meanwhile, the builder is hoping to foster nuclear power plants as a new growth business, as it is also a major prospective national export item, according to the firm’s CEO, Kim Joong-kyum.

Hyundai Engineering is a contractor for the four nuclear reactors to be completed in United Arab Emirates by 2020. Korea signed the first-ever contract to export nuclear power plants to the Arab nation in 2009.

The firm is currently constructing the third and fourth Singori nuclear power plants in Ulsan, South Gyeongsang Province, which are expected to be completed in 2013 and 2014, respectively.

Kim is said to be paying extra attention to the quality and safety of the facilities as they are the same models as those which will be built in the UAE, the firm said.

The two facilities, according to the builder, will boast a capacity of 1,400 megawatts, which shows a 40 percent increase from the existing 1,000 megawatt-facilities common here.

Hyundai Engineering has been showing expertise in nuclear power facilities, having constructed 12 of 20 nationwide which are in operation at the moment.

Korean builders have been shifting their focus abroad for a long time due to a small domestic market and consequent fierce competition.

Hyundai Engineering began its overseas business in 1965 and its accumulated sales from such projects stands at more than $78 billion as of November, according to the firm.