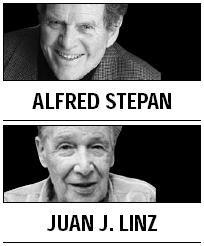 Of course, what the army does is hugely important. Splits in a military-supported authoritarian regime can create gaps between the temporary interests of the small group closest to the “military as government” and the long-term interest of the “military as institution,” which is to be a respected part of the state and nation.

The Egyptian army’s statement early in the protests that its soldiers would not shoot at anti-Mubarak protesters was a classic “military as institution” move, and useful in itself for a democratic transition. By contrast, the army’s decision to allow Mubarak loyalists ― some riding camels or horses ― to charge into Cairo’s Tahrir Square and attack thousands of anti-government demonstrators was a classic “military as government” move.

At this point, a democratic transition will most likely require that the army play a more active role in protecting protesters. What is clear is that the interest of the “military as institution” depends on the army’s ability to establish much greater separation from the regime.

Successful political transitions are also helped if more and more citizens come to feel that they “own” the protests and the resulting transition. In this respect, the fact that the demand for Mubarak’s immediate resignation originated from Cairo’s Tahrir Square rather than from the Obama administration is a positive development.

Many of the opposition groups, representing a broad spectrum of opinion ― including a traditional liberal party, the Islamist Muslim Brotherhood, and the Facebook activists of the April 6 Youth Movement ― have indicated that they might support an interim government, possibly one led by the Nobel Peace Prize winner Mohamed ElBaradei.

But, in order to choose a leader, these groups must coalesce into a coherent force. Great civil-society protest movements ― such as have occurred in Egypt and Tunisia ― can overthrow a dictatorship, but a true democracy requires parties, negotiations, election rules, and agreement on constitutional changes. In most successful transitions, the first step toward forging the unity required to create an interim government is taken when the diverse groups begin to meet more often, develop common strategies, and issue collective statements.

Most activists and commentators are now asking who will or should be the next president. But why assume that a presidential political system, headed by a powerful unitary executive, will be instituted? Of the eight post-communist countries that are now in the European Union, not one chose such a system. All of them established some form of parliamentary system, in which the government is directly accountable to the legislature and the president’s powers are limited (and often largely ceremonial).

That was a wise decision. A presidential election at a moment of great uncertainty, and in the absence of experienced democratic parties or broadly accepted leaders, is filled with danger.

To elect a president is to commit to one person, generally for at least four years. But it is very uncertain that any person elected today in Egypt would have the same support in even a year. For example, if there are many candidates in a first round of a presidential election, it is conceivable that neither of the two candidates in the second-round run-off will have won more than 20 percent in the first round. The winner would thus assume all the burdens of leadership with the support of only a small minority of the electorate.

It is also possible that a new president turns out to be incompetent, or is in a permanent minority position and unable to pass legislation. Many new democracies thus fall rapidly into “super-presidentialism” with plebiscitary qualities.

Fortunately, Egyptian and Tunisian democratic activists and theorists are actively debating the parliamentary alternative. In that case, Egypt’s first free and fair election would give rise to a constituent assembly that immediately provided a democratic base for the government, as well as for efforts to amend or rewrite the constitution.

First, unlike presidentialism, a parliamentary system can give rise to multiparty ruling coalitions. Second, unlike a president, who, however incompetent or unpopular, remains in power for a fixed term, the head of government in a parliamentary system can be removed at any time by a vote of no confidence, clearing the way for a new, majority-backed government ― or, failing that, fresh elections.

Some democratic nationalists in Egypt defend parliamentarianism with an important new argument: a contentious, pluralist, probably multiparty coalition government would be harder for the United States to dominate than a lone “super-president” like Mubarak.

Tunisian advocates of parliamentarianism like this argument, but they also stress that a parliamentary system would address the huge task of creating democratic and effective political parties better than presidentialism would. A parliamentary system, not a president-cum-pharoah, looks like the best path for both countries.

Alfred Stepan and Juan J. Linz are the authors of “Problems of Democratic Transition and Consolidation.” Their newest book (with Yogendra Yadav) is “Crafting State Nations.” ― Ed.