Global Asia aims to represent views of the region


Quarterly journal Global Asia, the first-ever international magazine representing Asian voices, aims to become an intellectual hub of the region, opening an arena for innovation and the development of a regional identity, its editor-in-chief said.

The English-language journal is published by the East Asia Foundation, a non-profit organization registered with the Ministry of Foreign Affairs and Trade. Its editorial board consists of internationally renowned scholars and opinion leaders including veteran journalist David Plott as managing editor and economist Barry Eichengreen as an editorial board member.

“Why should we go to the United States and use American magazines to voice our views? Why can’t South Korea be an intellectual hub of Asia?,” Moon Chung-in, editor-in-chief of Global Asia and professor of political science at Yonsei University, said in an interview with The Korea Herald.

“We want South Korea to be the hub of ideas, innovations and intellectual discourse. Global Asia may be the epitome.”

Launched in 2006, the magazine was able to increase its number of readers around the world to 7,000 as of last year, according to Moon.

The content is extensive, ranging from foreign affairs and policies to economy to environment and corporate strategies.

The magazine focuses on three areas: security and peace, prosperity and welfare, and the idea of community building in Asia, Moon said.

Global Asia deals with inter-Korean relations as well but the issue makes up less than 10 percent of the magazine’s content, he said.

“We hope the magazine can make contributions to Korean unification, too,” he said.
The magazine reaches major libraries, universities, political leaders, the mass media and opinion leaders. A great portion of Global Asia is distributed across Asia, while Korea ranks first in terms of readership, followed by the U.S., Southeast Asia and China, according to Moon.

One of the memorable responses from readers was when Bruce Cumings, a University of Chicago professor who specializes in modern Korean history, quoted extensively from a journal article on nationalism and regionalism in East Asia written by late President Roh Moo-hyun.

“U.S. universities are adopting Global Asia as their classroom reading assignments and sending feedback to us. The American Naval War College once asked use to reprint 400 copies,” Moon said.

The magazine receives corporate sponsorship from local conglomerates including Hyundai Motor and Kia Motors, as Hyundai Kia Automotive Group chairman Chung Mong-koo is the founder and former chairman of the EAF.

Now, Gong Ro-myung, professor at Dongseo University and former foreign minister, is chairman of the EAF and publisher of Global Asia.

Although the magazine is in partnerships with conglomerates, business circles do not interfere with Global Asia’s editorial board at all, Moon said.

He added that the magazine goes beyond ideological polarization.

“Publisher Gong is known as a very, very conservative figure, while I’m known to be very, very liberal ... We were successful in overcoming contending views and ideologies,” Moon said.

“We have a debate section, always inviting pros and cons, conservatives and liberals.”

However, Global Asia has challenges to overcome as well.

The insufficient English proficiency of Asian people is one of them, Moon said.

Although the South Korean government has striven to enhance the brand image of Korea abroad, the reality is that it is extremely difficult to have an English-language publication in the nation, he said.

“Competence in English is an indicator of globalization. But more subscriptions come from the U.S. It is paradoxical,” Moon said.

Another challenge is to increase corporate sponsorship for advertisement, while the annual budget for Global Asia has been set at nearly $500,000.

Korean firms have been sponsoring advertisements but the magazine hopes to get funding from Japanese, Chinese and even U.S. firms, Moon said.

Global Asia is preparing to publish its March issue which will have a special cover story on India. In June, it will cover Russia and the upcoming 2012 APEC Summit in Vladivostok. The September issue will deal with security and economy in East Asia with regard to the rise of China, and the winter issue will look at the outlook for Asia for 2050.

• Yonsei University political science professor Moon Chung-in has served as dean of Yonsei’s Graduate School of International Studies and as chairman of the Presidential Committee on Northeast Asian Cooperation Initiative, a cabinet-level post. He has also been Ambassador for International Security Affairs at the Ministry of Foreign Affairs and Trade.

• He has published more than 40 books and 230 articles in edited volumes and such scholarly journals as World Politics, International Studies Quarterly and World Development.

• His recent publications include “The United States and Northeast Asia: Debates, Issues, and the New Order,” “Handbook of Korean Unification,” “Arms Control on the Korean Peninsula,” “War and Peace in Asia” and “Ending the Cold War in Korea.”
East Asia Foundation 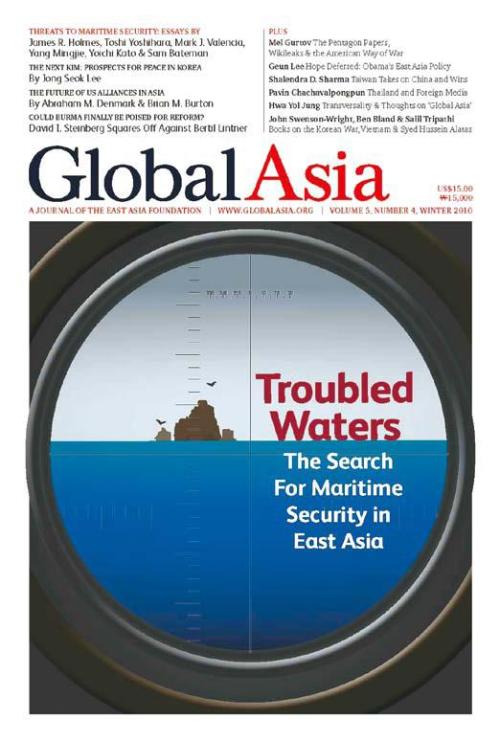 Global Asia is one of the two vehicles of the East Asia Foundation to promote peace and prosperity of Asia. The other one is Council on East Asia, consisting of opinion leaders from Korea, China, the United States, Japan Russia and Southeast Asian countries. The council members are also contributing writers to Global Asia.

The East Asia Foundation is to co-host the 6th Jeju Forum for Peace and Prosperity from May 27 to May 29 on Jeju Island with the Jeju Special Self-Governing Province and the International Peace Foundation.

The agenda will include maritime security, issues related to nuclear security summit and Korean reunification.

The print edition of Global Asia is published quarterly, while the Internet edition is updated continuously with new articles and contributions. To subscribe to Global Asia, visit www.globalasia.org.