India’s Ministry of Environment and Forests gave POSCO conditional approval to go ahead with buying up land for an integrated steelworks and to continue processes for its plans for iron ore exploration in the state of Orissa in eastern India.

The approval opens the way for the steelmaker to gain a solid foothold in one of the world’s fastest growing regions.

The new plant will be capable of producing 12 million metric tons of steel per year and the iron ore mine will have an annual output of 20 million tons, the company said.

The project will be conducted in stages, the first of which will see the construction of a 4 million-ton capacity blast furnace.

The plans will also see a harbor built within the steelworks, and a 289-kilometer railroad linking the facility with the Paradip Port. 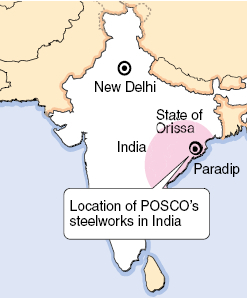 “India was selected for the project due to the country’s rich resources and the high growth potential of its steel market as part of our plans to strengthen the global network,” a POSCO official said. He added that site preparations usually take about one year and about three years is required to build an integrated steel mill.

“But it is still too early to suggest a timetable for the project since progress can vary depending on local conditions.”

The approval comes nearly six months after the Ministry of Environment and Forests ordered the company in August to stop buying up land for the steelworks following allegations by non-governmental organizations that the project breached the county’s Forest Rights Act.

Conditions include covering 25 percent of the total area with vegetation and spending 2 percent of the operation’s net profits for corporate social responsibility projects for the region.

The steelmaker is also required to avoid areas with high coastal erosion for the port, and submit detailed marine conservation plans.

The project, initiated as part of the steelmaker’s plans to expand its global production network and to secure a stable source of raw materials, began in 2005 with POSCO setting up an Indian branch.

Despite the project being the first overseas integrated steelworks POSCO had planned, unexpected delays have since caused the project to be overtaken by later projects. The iron ore exploration rights the company obtained became the subject of dispute with Indian concerns, while friction with the locals arose over land procurement procedures.

Since the launch of the India project, the company began working on the site for an integrated steelworks in Indonesia, and has approved plans to collaborate with Dongkuk Steel Mill Co. and the Brazilian mining firm Vale to build steelworks in Brazil.

However, with a capacity of 6 million tons planned for Indonesia and POSCO’s stakes in the Brazilian venture, which is to have an annual production capacity of 3 million tons, being only 20 percent, the Indian project will become its largest overseas production base.

In addition, the company’s board of directors approved plans to invest $140 million into another Indian project on Tuesday in a bid to secure leadership in the fast growing market.

The new project will see the company establish a non-directional electric steel plate plant capable of producing 300,000 tons of such products each year. The plates are used in motors and other rotating devices.

The company said that works on the plant will begin this year with the aim of completing in August 2013.