Celebrating Seollal in the city


Seollal, the first day of the lunar calendar, is one of the most celebrated holidays in Korea. It has been traditionally considered a family-oriented occasion where people gather with their loved ones at home. But this year, more Seollal events are being held in Seoul for those who want to celebrate the holiday spirit and traditional culture somewhere different.

There are teaching sessions for “yunnori” and “jegichagi” ― Korea’s traditional folk games played on Lunar New Year ― events that feature Seollal’s ancestral ritual known as “charye,” and performances that offer both musical and theatrical accounts of Korea’s most significant holiday of all. And for those who would simply like to relax and enjoy their time off, movies of many genres are available during this three-day break.

Arts and crafts
To learn what it was like to celebrate Seollal some hundred years ago, visit Amsa-dong Prehistoric Settlement Site in Seoul (02-3426-3857) for its session on Seollal folk games from Feb. 3-4. Visitors will be able to try many Korean folk games that have been traditionally played at Lunar New Year.

The featured games will include “yunnori,” a traditional board game, and “jegichagi,” an outdoor folk game that consists of kicking jegi, a badminton shuttlecock-looking toy, and preventing it from falling to the ground. As well, there will be performances of Samulnori, a genre of traditional Korean percussion music and special lessons for those who would like to learn its four major instruments: Jing, Janggu, Buk and Kkwaenggwari.
Visitors will also get an opportunity to make their own “tteok,” Korea’s traditional rice cake. Free admission will be given to those dressed in hanbok, Korea’s traditional costume.

Back in the old days, Koreans would write their well-wishes on a piece of paper and put it on their main gate on Seollal. Namsangol Hanok Village (02-2266-6923) in central Seoul will give its visitors an opportunity to experience this old seasonal custom of Korea. The village will also provide traditional Korean kites and the opportunity to fly them. Koreans on Seollal used to fly the kites as a symbolic gesture, believing they would take away bad fortunes and leave good ones on the ground for the New Year. The events will run from Feb. 2-4.

If you haven’t been in Korea long enough to know anything about the holiday, check out Seoul Namsan Gukakdang’s (02-2261-0502) special Seollal culture program designed for foreign visitors.

Running from Feb. 1-5, the program consists of the very basic cultural practices of Seollal.

Participants will be given an opportunity to make “tteokguk” (sliced rice pasta soup), the signature Seollal dish, play “yunnori,” dress in Korea’s traditional costume hanbok, learn about darye, Korea’s tea ceremony, and give Sebae, a traditional activity on Seollal where one wishes his or her elders a happy new year by performing a deep traditional bow. The program begins at 4 p.m. each day.

“Charye,” the ancestral ritual performed on Seollal, is one of the most important Korean customs of the holiday. Seoul’s Unhyeon Palace (02-766-9090) will offer a special series of lectures on Charye, and the very traditional way of serving the ritual from Feb. 2-3. The palace will exhibit the traditional Charye table of Gyeonggi Province, and historians will explain the order of the Charye’s performance as well as the philosophical reasons behind the specific positioning of food and drinks.

And welcoming the year of the rabbit, Seoul Zoo (02-500-7114) will throw rabbit-themed events for Seollal, including a “rabbit photo-zone” where visitors can take pictures with the animal on the first day of the Lunar calendar. 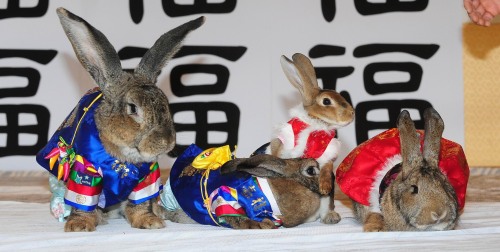 Performances
The National Gugak Center (02-580-3300), located in southern Seoul, will showcase a special set of traditional Korean music performances from Feb. 3-5. Celebrating its 60th anniversary, the center’s Seollal performances will feature many different genres of Gukak, including Pansori, vocal and percussion Gukak music, Yeonhee, Korea’s traditional theatrical performance, and fusion Gukak in an orchestral form.
The audience members will be given an opportunity to taste Korea’s traditional deserts, and make Seollal kites of their own. Free admission will be given to people who were born in the year of rabbit (1939, 1951,1963,1975,1987 and 1999).

In Northern Seoul, Dream Forest Art Center (02-2289-5401) will hold a special Samulnori performance, featuring Gukak musical group “Tteiru.” The group will perform exciting traditional folk songs of Korea, along with B-Boy dancers. “Tteiru” means “getting together” in a dialect of Korea’s late Silla Dynasty. The show aims to bring more people together, as it is one of the most important shared values of Seollal. The show starts at 3 p.m. on Feb. 3.

For families with children, Seoul Namsan Gukakdang’s (02-2261-0502) play “The Farting Lady” would be the show to watch. Based on a Korean folktale that appears on elementary school textbooks, the performance will consist of gukak, a puppet play, pantomime elements, and Korea’s traditional masked dance moves.
The comical play tells the story of Bong-soon, a young woman who has been married for three years. One of her biggest secrets has to do with something really embarrassing: her farts.

They can be so powerful that a house can almost break down. Bong-soon somehow successfully holds in her farts for the first three years of her marriage, but accidentally lets it fly one day. Her husband’s family kicks her out as a result. What will Bong-soon do to make a return to her husband?

Movies
For those who want to go out but don’t want to get too active, hitting a movie theater wouldn’t be a bad idea.

If you are to go out with your family members, director Kang Woo-seok’s “Glove,” a touching human drama about a junior baseball team made of 10 hearing-impaired teenagers, would be a great pick for parents and children alike.
Based on the true story of a junior baseball team at Chungju Sacred Heart School for the Deaf ― a Catholic school for hearing-impaired children and teenagers in Chungju, North Chungcheong Province ― the film offers an inspiring cinematic account of young souls who grow up with the sport and the many other challenges they face.

If you are a thriller buff, go for newly-released Hollywood blockbuster “Shanghai.” Co-starring Gong Li and John Cusack, the espionage thriller tells the story of Paul Soames (John Cusack), an American agent from the Naval Intelligent office who arrives in Shanghai during World War II.

Setting 1941 Shanghai as its background, in the months leading up to the Japanese bombing of Pearl Harbor, “Shanghai” delves into China’s complex political turmoil in the 1940s ― along with Cusack’s dangerous romance with beautiful and seductive Gong.

For romance movie lovers, there are many choices available during this holiday break. “I Am Love,” an Italian film starring Tilda Swinton tells a story of Emma, a middle-aged Russian woman who is married to an upper class Italian man. She helplessly falls in love with her grown-up son’s friend, a newly-established chef, as she tries a prawn dish he prepares for her.

“Love and Other Drugs” features a love story of a young couple (Anne Hathaway and Jake Gyllenhall) who grow to develop genuine feelings for each other after avoiding commitment in their relationship.

If you want a love story that’s one of a kind, go for “Cuban Boyfriend,” a personal documentary by Korean director Joung Ho-hyun. In the film, Joung colorfully reconstructs her own inter-cultural relationship with Orielvis Pardon, her Cuban husband who is 10 years younger than her. Go and see how they met, fell in love, and fought against all odds to stay with each other.