As a result, the shares of Samsung Electronics finished at a record closing high of 1.01 million won on the Seoul bourse, up 1.61 percent from the session a day before.

The accumulated sales for the flagship unit of the country’s top conglomerate Samsung Group in 2010 was up 13.4 percent from 136.3 trillion won reached in 2009 and operating profit also increased 58.3 percent from 10.9 trillion won in the previous year.

For the fourth quarter, the company posted earnings of 41.87 trillion won and operating profit of 3.01 trillion won, driven by closely following up in the telecommunications field, especially smartphones and tablet PCs.

The earnings of the telecommunications sector for last year recorded 41.2 trillion won of the total yearly sales, increasing 10 percent compared to 2009.

The number of mobile phones sold also went up to 280 million units, a 23 percent increase, taking up a greater share in the global market. 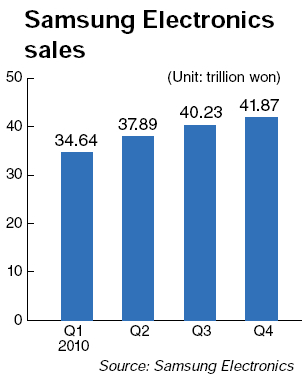 Samsung has been rushing to go head-to-head in the smartphone market since the release of Apple’s iPhone series in Korea in late 2009, launching its flagship mobile Galaxy S last summer.

“Samsung Electronics is now targeting selling 12 million units of smart TVs this year to enable consumers to naturally think of Samsung when purchasing smart TVs, and sell a total of 10 million units of 3-D TVs, a figure up five times from last year,” said Samsung officials.

It also maintained its leadership in the semiconductor industry by recording a 40 percent increase in sales and a 391 percent hike in operating profit despite the fall of memory chips, such as dynamic random access memory (DRAM), in the last quarter.

For the NAND Flash memory, there was strong demand for embedded segment backed by an increase in mobiles, its officials said.

“We plan to lead the market by injecting large investments and creating differentiated competitiveness in the midst of the uncertain global economy,” said a Samsung official.