Late for Tea at the Deer Palace: The Lost Dreams of My Iraqi Family
By Tamara Chalabi
(Harper, $27.99) 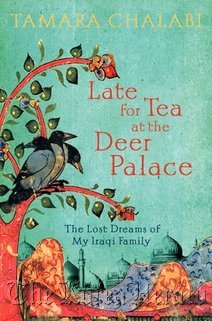 In this sweeping, enchanting memoir, Tamara Chalabi pieces together her illustrious family’s history and exile from Iraq in an attempt to uncover her own, fractured identity.

The author’s father, Ahmad Chalabi, is the character readers may be most curious to learn about; a key leader in the opposition to Saddam Hussein, he provided the U.S. with intelligence on weapons of mass destruction leading up to the costly invasion of Iraq that proved to be faulty.

But the controversial Iraqi politician is not the protagonist of this tale. This is Tamara Chalabi’s story; one of an inheritance of exile and a struggle to connect with a distant, troubled homeland.

“He has his own tale to tell, although I acknowledge that my father has played a pivotal role in shaping my relationship with his country, Iraq,” Chalabi writes. “As with everything in the Middle East, nothing makes sense until you understand the past, and the past is never straightforward.”

Chalabi, who earned her doctorate in history from Harvard, brings life to the history of a country whose story has been dominated by headlines of war and death.

She tells of Abdul Hussein, the family patriarch and a prominent member of the Shia Muslim community; his son, Abdul Hadi, a businessman turned politician; and a host of other relatives who each reflect a piece of Iraqi society and culture in its founding, golden age and later turmoil.

The most compelling tale is that of Bibi Bassam, the author’s grandmother. At 16, she becomes the wife of Abdul Hadi through an arranged marriage. Strong willed and good humored, she becomes an integral part of the Chalabi household and eventually the mother of nine children, the last of which is Ahmad.

Traditional yet unreserved, Bibi holds weekly gatherings for women at the beautiful Deer Palace and, in her own way, pushes for women’s rights and liberation. When the family is forced into exile, Bibi, through her stories and songs, becomes a key link to the past for future generations.

Chalabi also provides the reader with fascinating anecdotes of Iraqi history, from the country’s haphazard beginning and early leaders like King Faisal and archaeologist Gertrude Bell to the efforts of Iraqi exiles to remove Saddam Hussein. In 2003, Chalabi accompanied the Free Iraqi Forces, a volunteer battalion, the only female to do so apart from a newspaper correspondent embedded with the group.

She delivers a strong critique of the U.S. invasion of Iraq and the aftermath.

In the initial days, Chalabi notes, the Americans seemed deaf to the concerns of the Iraqi opposition and were “clearly working to a prearranged plan, whether it corresponded to the reality on the ground or not.”

“While many Iraqis rejoiced at the overt recognition of Saddam’s Iraq as part of the ‘axis of evil,’ it also seemed as if the debate ignored them, and was speaking to another audience: it was an embodiment of American angst,” she writes.

“Late for Tea at the Deer Palace” deftly combines elements of history and memoir, but shines most when the author lets the characters’ stories tell the history of Iraq.

Chalabi’s account of her own quest to find Iraq is equally moving.

“To have an inheritance of exile is a never-ending journey between myth and reality,” she concludes. “Part of my coming to terms with Iraq entails accepting a reality that was built on an old dream; the dream of another home.” (AP) 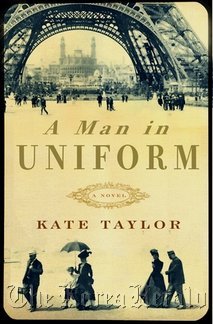 Author Kate Taylor’s portrait of honor and deception in turn-of-the-century Paris is alluring and suspenseful, an even greater testament to her skills as a writer when one considers that she draws her story from France‘s most notorious political scandal.

The outcome of the Dreyfus Affair has been dramatized in plays and films, including the Oscar-winning “The Life of Emile Zola” in 1937. Taylor, though, envisions the struggle to free an innocent man as a trigger for a French attorney to reconsider his own values.

Lawyer Francois Dubon is comfortable in mid-life — and no wonder. He enjoys a successful if boring practice, a dutiful wife and child, social prominence and a mistress he visits nearly every afternoon on his way home from the office. What he lacks is the moral conviction that had invigorated his life as a young man.

Shaking up his world is a widow, Madame Duhamel. A friend of the Dreyfus family — or so she claims — she beseeches Dubon to take on an appeal of the court-martial that has condemned French army officer Alfred Dreyfus to Devil’s Island for espionage and treason. Her confidence that he can find the real spy beguiles Dubon as much as her beauty and manner.

Drawn deeper into the mystery — is the Jewish army captain guilty after all or a victim of lies, indifference and anti-Semitism? — Dubon must decide whether to risk all that he has to join the fight for Dreyfus’ freedom. He begins to realize that truth is not as valued as reputation and appearance in Belle Epoque France.

The fate of Dreyfus is a historical fact, a question easily answered by a Google search. “A Man in Uniform” provides twists and turns fitting for a cozy mystery with an interesting historical setting. The charm of Taylor’s novel lies in her seemingly effortless prose and plotting — and her ability to make room for touches of subtle humor. (AP)