Battle Hymn of the Tiger Mother
By Amy Chua
(The Penguin Press, $25.95) 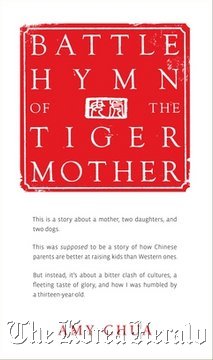 Amy Chua is an American-born daughter of Chinese immigrants from the Philippines. She’s a professor of law at Yale, married to another law professor at Yale who comes from an Orthodox Jewish family. So it’s no surprise that her first two books dealt with minorities and governments.

Her third book, “Battle Hymn of the Tiger Mother,” is a chatty, witty, intimate memoir of how she raised two daughters in hyper-severe Chinese style, despite the surrounding children of permissive American parents.

Chua’s father, a leading theorist of advanced mathematics, gave her a model for perfectionism. In eighth grade, she placed second in a history contest. Someone else was named best all-around student. She invited her family to the ceremony.

“Afterward,” she writes, “my father said to me: ‘Never, never, disgrace me like that again.’”

She pursued that model. Though generous with family fun and affection, she denied her daughters, Sophia and Louisa (Lulu), experiences that are important to many young Americans: no TV, no pets, no computer games, no sleepovers, no play dates, no grades under A, no parts in school plays, no complaints about not having parts in school plays, no choice of extracurricular activities, nothing less than top places in any school class except gym and drama, no musical instruments except piano or violin.

Compulsory for the girls: speed drills in math, exclusive use of the family‘s Chinese dialect at home, lessons in Mandarin Chinese, long hours of music practice closely coached by Chua, with double sessions on weekends and no break on vacations.

Music has been a primary concern — Bach, Mozart, Beethoven, Debussy, Dvorak. The program worked, in part. Sophia won a contest at 14 that brought her a piano recital at Carnegie Hall in New York City.

Lulu, at age 6, didn’t want to learn to play the violin. Chua bullied her with threats of a spanking and a missed dinner. Good teachers helped Lulu develop an affinity with the instrument and she became concert master of a youth orchestra.

Lulu‘s rebellion climaxed on a vacation in Russia. At a cafe in the GUM, the big shopping mall on Moscow’s Red Square, she refused Chua‘s command to just taste the caviar — and smashed a glass in defiance.

Chua fled, running. She had a fleeting thought the guards at Lenin’s tomb across the square would shoot her, but she returned to the cafe, announcing: “You win. It‘s over. We’re giving up the violin.”

Back home, Lulu turned to tennis, but said she missed the orchestra. Her tiger mother, clandestinely, did some research. Occasionally, at breakfast or while saying goodnight, Chua would burst out with something like “more rotation on the swing volley!” Lulu would plug her ears.

There was much family discussion of how the book would end. Chua finally suggests a possible road toward reconciling Chinese and American attitudes toward education. Parents can judge how practical it may be. (AP)


Full of twists and turns 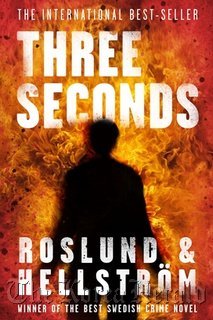 Ex-con Piet Hoffman is an informant for the Swedish police, and he‘s on the verge of taking down one of the most notorious crime rings in the world. The Polish mafia bosses are planning to take over the drug trade inside Sweden’s largest prisons, and they have entrusted Hoffman with the job.

Hoffman is a family man with a wife he loves and two young sons. His plan is to do what the police need him to do and then be out forever, the famous “last job.” He plans every detail, down to putting drugs in cold tulips so they bloom when he needs to retrieve the drugs.

His handler, Erik Wilson, has to falsify Hoffman’s record so he looks like someone who is a dangerous drug kingpin. That’s where the trouble begins.

Authors Anders Roslund, an investigative journalist, and Borge Hellstrom, an ex-con who works to rehabilitate criminals, won the Swedish Academy of Crime Writers’ Award for “Three Seconds.” They use the story to point out flaws in the Swedish police’s use of ex-cons as informants, a system that faces much scrutiny.

There is corruption at every turn in “Three Seconds,” from the police officers who are supposed to be taking care of the informants to the politicians who pull the strings. Roslund and Hellstrom are dissecting the process, and they do so very well in this highly entertaining novel that is full of twists and turns.

Some of the local Swedish jargon can be hard to follow, and knowledge of Swedish prisons and politics is needed to navigate the story clearly. However, the action quickly draws you in and continues to grip you to the final chapters of the novel. The authors have something to say, and “Three Seconds” proves to be an excellent way of doing it.