Female soldiers to get their own uniforms

Female Korean soldiers, of which there are about 6,000, have worn unisex combat uniforms and have pointed out that their uniforms do not fit them comfortably, particularly in their chests, shoulders and waists. 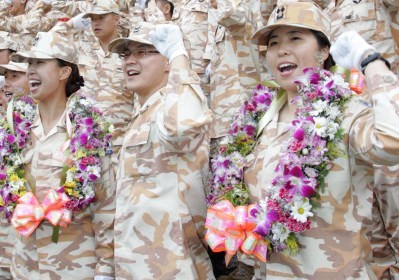 Since last month, the military has been testing the new uniforms on about 10 soldiers working at seven units of the Army, Navy and Air Force, and will revise them should problems arise during the testing period, military officials said.

“The new uniform was created after the military measured bodies of some 35 female soldiers. We will measure more soldiers for the uniform production and continuously supplement it,” said an official at the Ministry of National Defense on condition of anonymity.

“We will develop a uniform that is most suitable for female soldiers after analyzing a variety of their activities ranging from military exercises and their routine activities.”

Nam Yoon-ja, professor in the department of clothing and textiles at Seoul National University, has led the project to develop the uniform, which has more space around the breast area than the current uniform, shorter shoulders and a tighter waist.

The project to develop the female combat uniform was initiated after the agreement on cooperation in the development of next-generation military textiles was reached in March between the MND and the Ministry of Knowledge Economy.

The MND inked the agreement to use the high-tech textile, which the MKE has developed, for the production of military uniforms.

The U.S. military has also recently been testing a female combat uniform. It reportedly plans to have around 600 female soldiers wear the uniform for test purposes next year and begin distributing it to its 160,000 female soldiers in 2012.