Formula One, the world’s fastest sport, is here

Lee, a member of a motor racing fraternity, is planning to spend a weekend with other members in Yeongam next week.

“I’ve been gathering information about the race. There seems not much about it. Well, I’m a bit worried. But I’m definitely going to see the race.”
Like Lee, hundreds of thousands of fans will be gathering at the small town some 380 kilometers southwest of Seoul for the weekend of Oct. 22-24, the country’s first F1 Grand Prix.

Imagine Formula One cars screaming down a track at speeds of over 300 kph and the ear-splitting roar of those over-powered engines. Behind the steering wheels sit glamorous drivers cheered on by their even more glamorous girl friends. Sound exciting?

Despite all the concerns and doubts that the venue might not be ready by the Oct 24 race date, the Yeongam Circuit is getting ready to launch Korea’s first ever F1 Grand Prix next weekend.

With just three races remaining, the inaugural Korean Grand Prix promises to be a very intense race for the teams and drivers in the hunt for the 2010 season title.

If you are going for the event, but wondering how to enjoy the world’s most expensive sport, here are some tips that might be of help to you.

Yes, F1 is all about which team and driver has the fastest car, the most points and wins. But it is a quite complicated sport. The more you know about the rules and system, the better your chances of enjoying it.

F1 Grand Prix is a three-day event that starts on Friday and ends on Sunday. During the first day, all race drivers take part in 2 hour 30 minutes practice session, though it is not compulsory for them to do so.

The following day, the drivers have a qualifying session to decide pole position and the starting order for the real race on Sunday.

The one-hour qualifying session, which will take place at the Yeongam Circuit from 2 p.m. to 3 p.m. on Oct. 23, is divided into three rounds.

All 26 cars will round the track for 20 minutes, and at the end of the first round, the slowest eight cars will be eliminated to fill the final eight grid places.

After a seven-minute break, they will run the track again for 15 minutes, and another eight cars will be knocked out to fill the 11-18 grids.

The remaining 10 cars will have another 10-minute session to decide who will get the pole position and starting order for the top 10 grid.

Watching the qualifying session can be great fun as it can be very intense at times. Once it’s done, the real race begins. The Korean Grand Prix’s main race will kick off at 3 p.m. on Oct. 24.

To bring more excitement to the sport, FIA, the sport’s governing body, introduced a new points system at the start of this season.

Currently, Mark Webber with Red Bull is leading the race with 220 points, 14 points ahead of Fernando Alonso of Ferrari and Germany’s Sebastian Vettel.

Two English drivers, Lewis Hamilton and Jason Button, are chasing the leaders with 192 and 189 points respectively.

With only three races to go, the title race between the leading five is still wide open. For them, winning the Korean Grand Prix will be crucial in order to claim the 2010 season title.

Knowing the circuit will be not only helpful for the drivers, but also for fans to enjoy the race. Designed by renowned German architect Herman Tilke, the Korean International Circuit can accommodate up to 130,000 spectators, with 16,000 seats at the Main Grand Stand and other stands along the 5.615 km track. 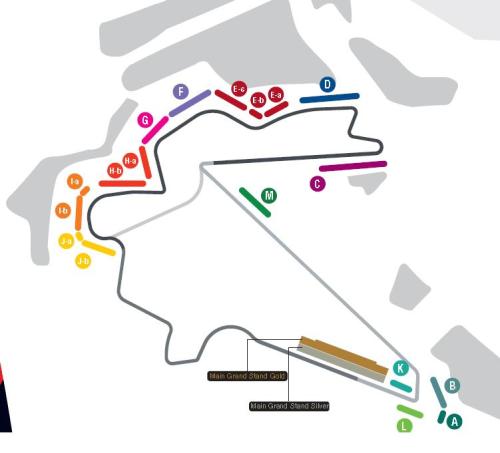 One of the key features of the newly built track is the first sector. After the first corner of the circuit, drivers will confront the 1.2 kilometer straight course, the longest straight of any F1 circuit in Asia, which will allow drivers to test their limit with speeds up to 320 kph.

After turns 3 to 6, the course features a lot of twists and turns. The drivers need to demonstrate exceptional handling skills to get through there.

“The design is very interesting. It is a good combination of fast corners, slow corners, places to overtake and places to challenge,” said F1 driver Karun Chandok of India.

The HRT team driver, who had a dry run test for the Yeongam Circuit last month, added the fact that no driver has had experience in running Korea’s first ever F1 circuit is going to make the race even more interesting.

As the Korean Grand Prix is a part of 19-race tour of the 2010 season, all F1 teams and drivers are expected to turn up at the Yeongam circuit.

Schumacher, the seven-time world champion, famous for his successful 11-year spell with Ferrari, made a surprise comeback with Mercedes GP this season after his retirement from the sport in 2006.

So far this year, the 41-year-old German driver seems to be struggling to come to grips with handling his new car. He, however, showed an encouraging performance in the Japanese Grand Prix earlier this month and is expected to show some high-quality skills in Yeongam.

Pundits say Fernando Alonso, the F1’s top wage-earner who makes more than $40 m a year from his Ferrari team, is the one to look out for at the Korean Grand Prix. The two-time world champion finished third, behind Sebastian Vettel and Mark Webber, at the Japanese Grand Prix.

Speaking to the F1 website the Spaniard claimed that he was determined to close the gap with Webber.

“In Korea, I will have to attack because now I must close the gap to Webber. To lose any more ground would make the situation more complicated,” he said. 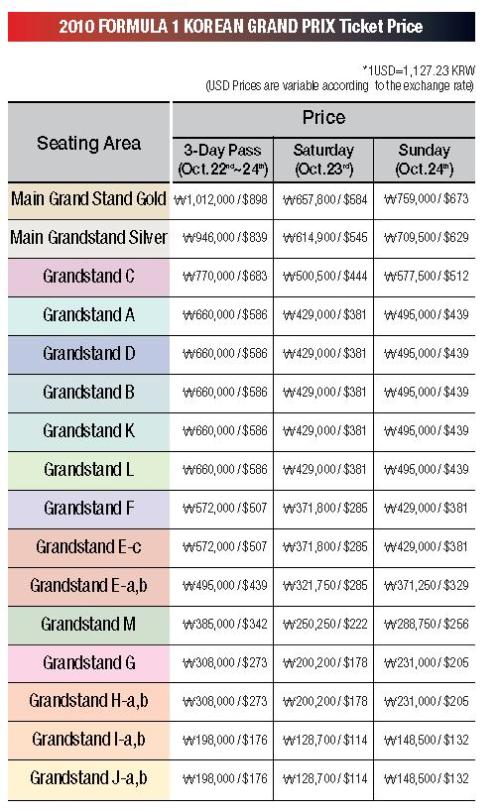 The KAVO, the event organization, said the best choice would be the Main Grand Stand, where one can watch the start, finish, nail-biting racing and also all the frantic action of the pits. Three-day pass for the Main Grand Stand Gold cost 1,012,000 won while single-day tickets for Saturday and Sunday cost 657,800 won and 759,000 won respectively.

The next best option would be Grand Stand A and B. Located right after turn 1, facing the start line, the course has the most potential as an overtaking zone, according to the KAVO.

Grand Stand C and D face each other in the northern section of the track. From there one can get a thrilling close-up view of the race.

On the edge of the 1.2 km-long strait course sits Grand Stand M. This is where one can hear the loudest ear-piercing sounds during the race. But one should bear in mind the cars will run down the straight course at lightning speed.

How to get there

A domestic flight service from Gimpo Airport to Muan airport is also planned during the event ― one on Saturday and two flights on Sunday. A shuttle bus service will be available from Muan Airport.

Also, a direct bus route to the venue from Seoul Express Bus terminal, Mokpo Terminal and Gwangju Terminal will be provided for the race, according to the organizers.

Planning to drive to Yeongam? One should remember that parking at the circuit is likely to be a nightmare, unless you’re willing to turn up at 7 a.m. or before that.

The local organizers, however, are planning to operate 12 parking lots around the city with capacity for more than 37,000 cars during the event. Shuttle buses will run every half a hour from all the parking lots to the circuit.

No tickets? No problem. There are plenty of activities from race-themed events, exhibitions and music concerts to parties taking place during the three-day event. Every night, rave parties with renowned DJs will be held around the circuit. If you are lucky, you’ll get a chance to share a dance floor with a celebrity or a driver.