Nam, who did not wish to give his first name, is 36-year-old civil servant who is ready to get married. The only problem is that he hasn’t met the right woman yet.

“Marriage is one of the most important purposes in life and also a source of happiness. Finding a wife and settling down with her is very important to me. I can also achieve financial and social stability through marriage,” he said.

Cases such as Nam’s are becoming all the more typical as a growing number of men remain single for longer -- or even forego marriage altogether, reflecting the nation’s steadily declining marriage rate. Last year, Korea recorded its lowest ever, with 6.2 marriages per 1,000 people.

Although some men are choosing to stay single, as a group they are markedly more positive toward the idea of marriage than their female peers.

Just six in 10 women view marriage as a must. For men, the figure is eight in 10. Once married, men are similarly more positive than women.

According to a survey taken last May, 70.6 percent of husbands were happy with their spouses, compared to 60.8 percent of wives. 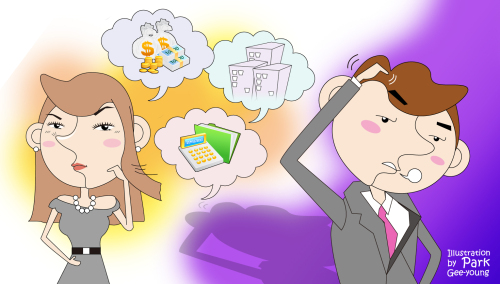 Jung Hee-taek, a 39-year-old model agent and singleton, believes that culture has something to do with it.

“I think the thought that marriage is a necessity comes from our parent’s generation. ‘A woman can live alone though old, but a man shouldn’t live alone when he is old’ is what I grew up hearing all the time,” he said

But Jung isn’t in any rush to walk down the aisle himself. He has thought about marriage but says that seeing married couples around him struggle with their finances and get divorced has made him think twice.

“I have thought, why I should get married if I am to get divorced soon? Also, perspectives and life styles have changed from the past, and people want to live alone. The salary they get is just enough to enjoy for themselves alone, but to share that... seems like no fun.”

Choi Jong-yun, a 29-year-old, hopes to marry in a few years but is happy to stay single for the time being.

“I think people fear the responsibilities that come with marriage. Especially, women think child care puts a stop to their life,” he said.

He says that many women’s perception of marriage as being a far from equal partnership explains why more women view it negatively than men.

“In Korean society, marriage represents stability and comfort to men, but sacrifice to women. If a woman who has a good educational background or is from the upper class has to sacrifice her career over child care -- that will be the biggest sacrifice for them.”

Nam agrees that marriage can be difficult for women but argues that men face many of the same challenges.

“In Korean society, marriage is considered to be merging two different families, rather than merging two individuals. Therefore, old people might think that the husband’s family should be treated more importantly than the wife’s. In this aspect, women have to go through many troubles as their family doesn’t get treated equally to their husband’s. However, men also go through those troubles. The weight of the troubles on both husband and wife is not very much different,” he said.

One man who is something of an authority on the single life is 38-year-old author Cho Han-woong. In 2008 he penned “Single Man Story,” a book detailing his experiences of love and life as a bachelor in Korea. Having broken up with several girlfriends he thought he’d eventually marry, Cho says being single wasn’t a conscious decision but simply how he “ended up.”

“Watching married people makes me want to marry soon, but sometimes I feel glad that I didn’t get married. The continuous dilemma between these two thoughts makes me more confused about whether or not I should get married soon,” he said.

For those who do want to marry, economic reality can be a major barrier.

“As apartments become expensive, a man has to possess at least 100 million won ($88,403) in assets. But for a man who does not have a job in a big company, saving up that much money is not easy. That being the case, many men these days find it hard to get married,” said Cho.

But money is not the only barrier to finding a wife. A study last year by the Gyeonggi Province Family and Women’s Research Institute suggested that by 2014 one in five men in Korea will have difficulty finding a spouse as the imbalance between men and women reaches a record high, fuelled in part by sex-selective abortions.

Added to this is the growing reluctance of many women to get married at all. With fewer and fewer Korean women willing to walk down the aisle, some men -- farmers in particular -- are looking to countries overseas.

Choi Jong-yun says that he has been tempted to marry abroad, but not out of necessity.

“It is not hard to find a wife in Korea, for me. I sometimes think, just for selfish reasons, that I want to get married to a Vietnamese woman. Women from Vietnam or the Philippines do not have to pursue a career in Korea, but can be a stay-at-home mom,” he said.

As far as Cho Han-woong is concerned, finding a suitable wife is difficult no matter what country one is looking in. He recounts a piece of dialogue between two characters from “Wedding Campaign,” a Korean film in which a rural man travels to find a foreign wife, to make his point.

“Here is an excerpt from the movie script: ‘Why are you trying to get married with a woman you can’t even communicate with?’ ‘Do you think it’s any easier to communicate with a Korean woman?” he said.

“It is certainly exaggerated a bit, but many men agree with this dialogue. It’s hard to find a woman in Korea, but I don’t think it’s easy elsewhere.”

Despite the efforts of successive governments, including increases in child care spending and improvements in maternity law, there is little to suggest that Korea’s marriage rate is likely to rise in the near future. Cho says that more must be done.

“The policies the government has come up with, I guess, aren’t attractive enough to get married or have a child. However, the government’s efforts to build small sized apartments for newly-weds and tax deductions are very positive movements.

“Nevertheless, don’t you think the government should deal with more fundamental problems?”

This is the second of a two-part series on the nation’s declining marriage rate, this time focusing on men.