This year’s spring was cooler than usual. The average temperature in April was 9.9 degrees Celsius, the lowest since 1973.

There was also less sunshine this spring. The country saw an average total of 176.5 hours sunshine in April, far below the usual 215 hours.

In Busan, the city’s March sunshine duration was 117.4 hours, the shortest since the national weather agency started weather observations in 1905.

Summer, however, was the second hottest in 37 years.

The average temperature was 24.8 degrees Celsius, the second highest since 1973.
The country experienced an average of 12.4 tropical evenings ― defined as nights when the lowest temperature is higher than 25 degrees Celsius ― more than double the 5.4 days of the previous year.

From August, there were frequent localized heavy rainfalls across the nation.

August precipitation of 374.5 millimeters was more than the 304.2 millimeters of rain during the usual rainy season between June and July.

Seoul received rainfall for 24 days in August, the highest number in the city’s history. Almost 75 percent of the city’s annual precipitation was concentrated during the 40 days between August and early September. 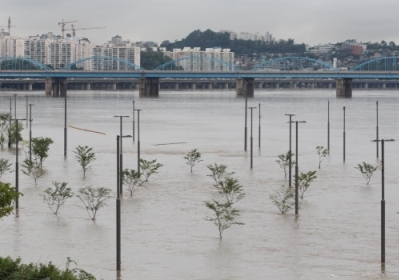 The increasing temperature of the surface of the tropical eastern Pacific Ocean, called El Nino, melted ice in Siberia, while chilly air caused a cooler spring in the Korean peninsular until May.

However, during a period of La Nina, the counterpart of El Nino, the sea surface temperature was lower than usual. This raised the temperature of the western Pacific Ocean, which added energy to North Pacific High Pressure.

The weather agency added that global warming would change the duration of each season as well as causing unusual weather conditions.

Along with a warmer temperature, spring and summer began earlier but autumn and winter started later.

The weather agency predicted that summer would be nine days longer by 2040, while winter would be eight days shorter.