Three incumbent ruling party legislators, three vice ministers and a former presidential aide made it into the Cabinet. They will take office after parliamentary confirmation hearings.

“The appointment of a young, self-made former governor as the prime minister indicates that the newly organized Cabinet will seek to improve communication with the younger generation and bring together people from different regions and classes,” senior presidential aide for public relations Hong Sang-pyo said.

“Cabinet ministers with expertise and experience in their 50s and 60s, and a prime minister in his 40s are expected lead change while maintaining stability based on a generational balance.”

The replacement of half of the Cabinet reflects the public’s demands for change shown in the June 2 local elections and the July 28 by-elections, Hong explained. The GNP defeated in the local elections, but won five of the eight parliamentary seats up for grabs in the by-elections.


The president appointed Rep. Yoo Jeong-bok, henchman of his political rival Rep. Park Geun-hye, as minister of agriculture and Rep. Lee Jae-oh, the kingmaker who made a successful comeback to the National Assembly in the by-elections last month, as minister of special affairs. 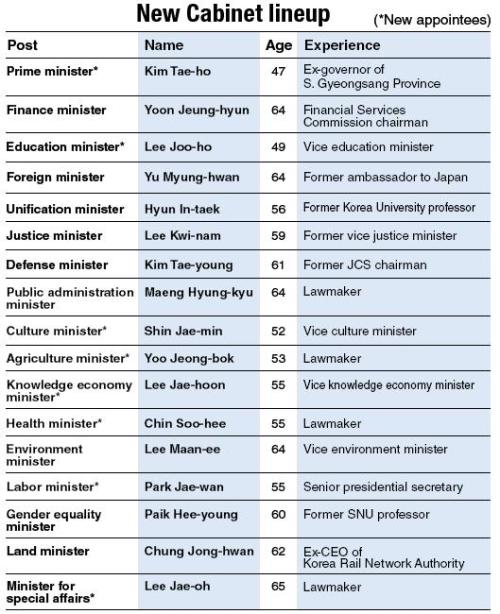 Bringing three legislators into the Cabinet indicates an effort to tighten political coordination between the ruling party and the government as factional cracks widen within the GNP. Along with nearly a third of the GNP lawmakers, Rep. Yoo supports factional leader Rep. Park Geun-hye, former GNP chairwoman who competed for the GNP’s presidential candidacy against the president in 2007 and has opposed to some of his key policies.

Lee Jae-oh, President Lee’s greatest powerbroker during the 2007 election campaign, is expected to lead the ruling bloc along with the recently appointed presidential chief of staff Rep. Yim Tae-hee and GNP chairman Ahn Sang-soo. The three have spent 10 years together in the GNP.

Former vice minister of labor Chung Jong-soo and former minister of knowledge economy Lim Chae-min were appointed as chief of the National Labor Relations Committee and minister of the Prime Minister of Office, respectively.

Chung Sun-tae, prosecutor-turned-chief of a panel that supports victims of forced labor under Japan’s colonial rule, was named minister of government legislation.

Vice commissioner of the National Tax Service Lee Hyun-dong was promoted to commissioner.

Entering the second half of his five-year presidency later this month, President Lee has announced that his administration will focus on center, pragmatist policies for the working class.